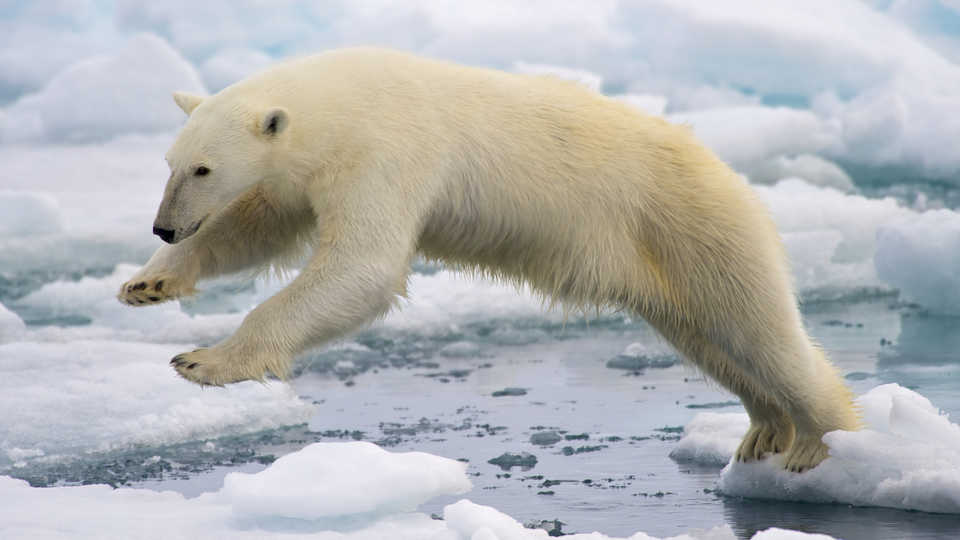 In a warming world, it’s not surprising that polar bears are in trouble. Just in the past week or two, scientists reported on polar bear hair loss and a decline in the Beaufort Sea population near Alaska. Today, a study in PLoS ONE bears more bad news: dramatic changes in the timing and duration of ice cover, especially the possibility of long ice-free periods, may prove a serious threat to polar bears before the end of the 21st century.

The authors of this study used sea ice projections for the Canadian Arctic Archipelago from 2006-2100. They paired the projections with metrics for the amount of food the animals need to survive. The result: insight into the conservation challenges for polar bears facing habitat loss.

With projected warming, the region’s thicker, multiyear ice will give way to thinner, annual ice cover—and ice-free summers could become the new normal. According to the paper, by 2070, “over 80% of the CAA [Canadian Arctic Archipelago] might experience break-up in July, forcing pregnant females to retreat to land early, with possible negative effects on their reproductive output.”

Each polar bear population in the Archipelago—there are seven in the Archipelago, and nineteen populations of polar bears worldwide—may confront a new, ice-free landscape for several months each year, where no such conditions now exist. Under business-as-usual climate projections, polar bears may face starvation and reproductive failure across the entire Archipelago by the year 2100. “We predict that nearly one-tenth of the world’s polar bear habitat, as much as one-quarter of their global population, may undergo significant habitat loss under business-as-usual climate projections,” says lead author Stephen Hamilton, of the University of Alberta.

But there is hope. The authors point to two populations that continue to see multiyear ice and fewer ice-free events—those in the Queen Elizabeth and Norwegian Bays. And a 2010 study, led by Steven Amstrup of Polar Bears International, determined that emissions reductions like those recently proposed by President Obama and Chinese President Xi Jinping provide further cause for hope. With significant emissions reductions, sea ice reduction could also change course, preserving the habitats critical to polar bears’ survival.