Movement in narrow zones along plate boundaries causes most earthquakes. Most seismic activity occurs at three types of plate boundaries—divergent, convergent, and transform.

As the plates move past each other, they sometimes get caught and pressure builds up. When the plates finally give and slip due to the increased pressure, energy is released as seismic waves, causing the ground to shake. This is an earthquake.

Divergent (Spreading):This is where two plates move away from each other. Molten rock from the mantle erupts along the opening, forming new crust. The earthquakes that occur along these zones, called spreading centers, are relatively small. The Great Rift Valley in Africa, the Red Sea and the Gulf of Aden all formed as a result of divergent plate motion.

Convergent (Colliding): This occurs when plates move towards each other and collide. When a continental plate meets an oceanic plate, the thinner, denser, and more flexible oceanic plate sinks beneath the thicker, more rigid continental plate. This is called subduction. Subduction causes deep ocean trenches to form, such as the one along the west coast of South America. The rocks pulled down under the continent begin to melt. Sometimes the molten rock rises to the surface, through the continent, forming a line of volcanoes. About 80% of earthquakes occur where plates are pushed together, called convergent boundaries.

Another form of convergent boundary is a collision where two continental plates meet head-on. Since neither plate is stronger than the other, they crumple and are pushed up. This can lead to the formation of huge, high mountain ranges such as the Himalayas.

When two tectonic plates slide past each other, the place where they meet is a transform or lateral fault. The San Andreas Fault is one of the best examples of lateral plate motion.

This post is part of Exploring Earthquakes, a rich collection of resources co-presented by the California Academy of Sciences and KQED. This material is also available as a free iBooks textbook and iTunes U course. 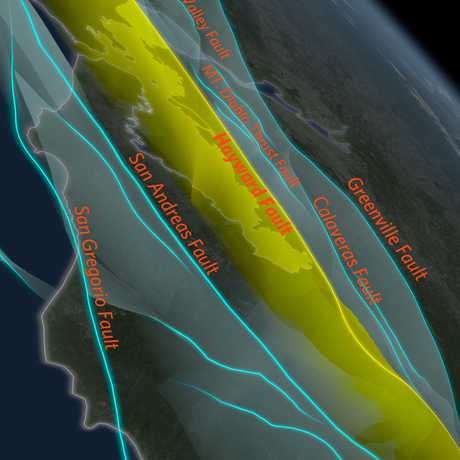 Faults: Where Earthquakes Occur
Faults are fractures in Earth’s crust where movement has occurred.