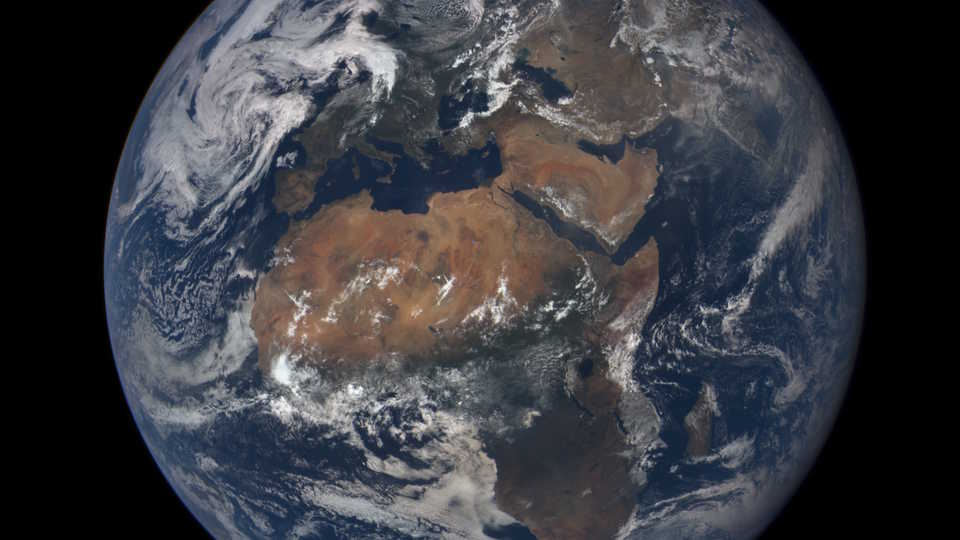 The annual American Geophysical Union (AGU) meeting opened yesterday in San Francisco, inviting over 20,000 scientists in several disciplines to share their research with other scientists and the public. The first day included much naval gazing—looking at the Earth from space to understand our climate and pollution, and at the microscopic level to understand underground methane production.

This past February, NASA launched the DSCOVR (Deep Space Climate Observatory) satellite toward its destination, one million miles from Earth. After four months of travel, it reached its cozy orbit at the the first Lagrange point, where the matching pull of gravity from the Sun and Earth allows the satellite to stay relatively stable between the two bodies and observe phenomena from both the Earth and Sun. (Bing Quock wrote about its mission and history here, right after the launch.)

At today’s AGU meeting, research teams from both NASA and NOAA released their first results from the Earth-facing view, seen from DSCOVR’s Earth Polychromatic Imaging Camera (EPIC). The camera captures a color image of the sunlit side of Earth every two hours, measuring in the visible, ultraviolet and near-infrared wavelengths. From its great distance, the scientists have found that the spacecraft can measure cloud height (and track events such as hurricanes), aerosols (such as Saharan dust and volcanic activity), Earth’s reflectivity, and even ship tracks!

While its solar-facing side will measure the solar wind and cosmic rays, these views of our own planet will help scientists understand how Earth is impacted by our changing climate.

NASA’s Aura satellite has been monitoring the Earth for just over a decade, and its Ozone Monitoring Instrument (OMI) measures atmospheric gases that can cause pollution. At the AGU meeting, researchers focused on nitrogen dioxide (NO2), a yellow-brown gas that is a common emission from cars, power plants, and industry. Nitrogen dioxide can quickly transform into ground-level ozone, a major respiratory pollutant in urban smog, plus a toxin for biodiversity and the water supply, according to Bryan Duncan of NASA Goddard.

Over the past decade, OMI has seen many changes in NO2 levels globally. In cities all around the world, where tighter regulations on cleaner vehicles and energy are enforced, NO2 has decreased significantly, in some places up to 20%! This even includes cities such as Beijing and Shanghai, while the rest of China has witnessed just the opposite: greatly increased levels of NO2. And that tends to be another trend: developed countries are seeing levels go down across the board, but developing nations, especially those dependent on electricity from coal-fired power plants, are seeing levels of NO2 on the rise.

Russ Dickerson of the University of Maryland, discussed how these data can provide more information than just NO2 pollution. Locally, he knows that the Chesapeake Bay is rebounding and the rockfish and oysters are coming back, but looking at visualizations of these data in the Middle East, Dickerson can demonstrate how Iraq is growing after the end of the war (and increasing NO2 emissions), and can show the migration out of Syria, with decreased productivity and NO2 emissions.

Even with the decreases of NO2 globally, we still have a long way to go, concluded Duncan.

A group of researchers from Ohio State University presented some initial results studying microbes from hydraulic fracturing (fracking) sites. “Twenty million liters of water, sand and chemicals are injected into a shale rock formation,” Kelly Wrighton explained. “How is that shaping a new ecosystem” underground?

We know that the process can create earthquakes, so the results could be just as groundbreaking. So far, their sampling demonstrates that there is life in the fluids coming out on other end, microbial life after the fracturing, and regardless of the fracking site (Texas, South Dakota, or Ohio), it’s the same microbes. There’s only three to four types of bacteria—very low biodiversity, when you consider the thousands of microbes in your own body, Wrighton pointed out—because “it’s an extreme ecosystem.”

In fact, it looks like the fracturing process is fueling the process of methane production through these bacteria. “Our results indicate that most of the organisms are coming from the input fluid”—water from nearby ponds and reservoirs—Wrighton said, and are adapting to their new life, consuming the chemicals and producing methane. Wright explains, “... in fact, the biocides [chemicals] that we add to inhibit their growth may actually be fueling the production of methane.” So fracturing creates more oil to extract? Yikes! But it’s actually hard to say at this point. The team is just beginning to sample pristine shale formations to understand what lives in these regions naturally. (Maybe they should have done that first?)