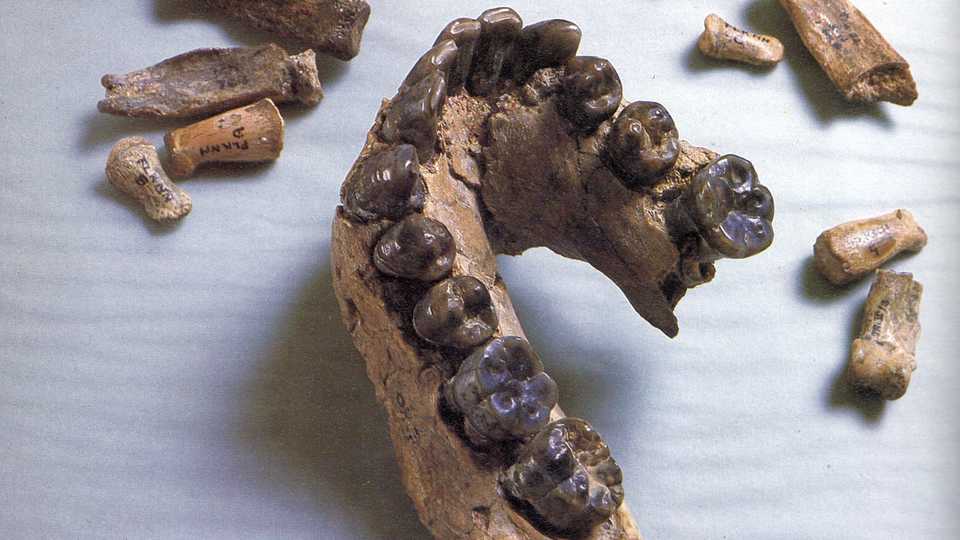 When a new species is described, a single “type” specimen, or “holotype,” is selected to represent the newly named species. Take our ancestor, Homo habilis. When its description was published in the 1960s, the name was established and based on a fossil discovered by Mary and Louis Leakey in eastern Africa. The specimen, called OH 7, became the holotype, for Homo habilis. Since then, many other fossil specimens have been discovered and labeled as Homo habilis, but OH 7 will always remain the holotype, no matter what new discoveries are made. But, unfortunately, this very important fossil is incomplete.

OH 7 includes a distorted lower jaw and bones from the hand and braincase. Attempting to create a more complete jaw, scientist Fred Spoor (of University College London) and his colleagues used CT scanning to reconstruct it. The Academy’s paleoanthropologist Zeray Alemseged explains, “CT scanning is a great tool because it captures images of the outside and inside of the fossil. It’s then possible to virtually manipulate the images, cut them, and reconstruct them for the preserved lower jaw.” The team scanned the preserved side of the jaw and created a mirror image of it, producing a more complete picture and 3-D printed model of the fossil.

More than 50 years after the discovery of OH 7, this new picture reveals that the jaw is quite primitive. Alemseged explains, “The two dental rows are almost parallel to each other and narrowly spaced, whereas in humans they are more parabolic. Our jaw widens toward the back.” Alemseged says that when the team tried to match the newly created jaw with fossils of Homo erectus and Homo rudolfensis, the jaw wouldn’t fit. “It’s much longer than our jaws,” he says. In fact, they found it fit into a more projecting face, more closely resembling the jaw of Australopithecus afarensis (think Lucy and Alemseged’s own find, Selam) than any Homo species.

“This work demonstrates that our genus Homo emerged much earlier than previously thought, some time before 2.3 million years ago,” Alemseged says. And while debates continue about Homo habilis and Homo rudolfensis being only one species (read more here), Alemseged argues that this finding confirms that multiple species of Homo existed at the same time. In fact, this new discovery enables scientists to assign other fossils to each of the two species, Alemseged says. “The longer jaws go to Homo habilis; shorter jaws to Homo rudolfensis,” he explains. “The scientists have created a framework for us to say right away in the field that what we have is one or the other.”

The findings, published today in Nature, also provide a new way to identify all Homo species. “Until today, brain size was the one of the key criteria to distinguish the differences between the species. But because there’s a lot of overlap in brain size between the Homo species, now the jaws rather than the brain will be more of a diagnostic trait,” Alemseged says.

This finding, plus another that will be published later this week, adds more knowledge to our family history, and more tools for paleoanthropologists such as Alemseged to do research on fossils, whether recently discovered or tucked away in museum collections.