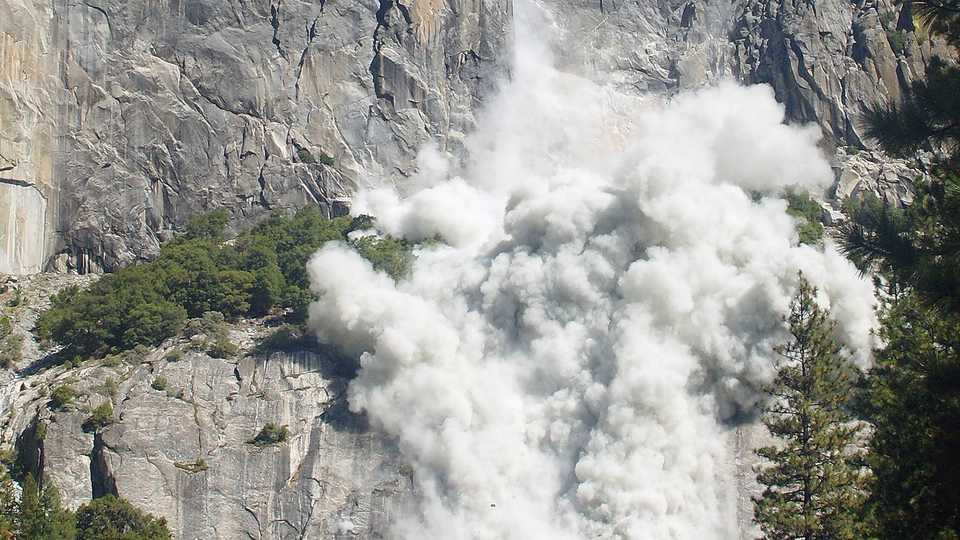 Visiting Yosemite this Summer? Watch out!

What causes rocks to fall off cliffs? Scientists understand that earthquakes, thawing after a freeze, and heavy rains can all trigger rockfalls. But eyewitness accounts of these erosion events in places such as Yosemite hinted that there must be something more going on.

About 15% of rockfalls from the famous granite cliffs in California’s Yosemite Valley occur during the hottest summer months and at the hottest times of the day, suggesting a role for temperature. So scientists from the US Geological Survey and Yosemite National Park created a “crackometer” to monitor one of the cliff faces in the famous park, placing the device in a crack that separates a partially detached slab of rock from the rest of the cliff. Over a three-and-a half year period, the team found that the crack opened and closed each day, corresponding to daily changes in temperature. As the seasons turned, the more the crack opened. The researchers determined that daily and seasonal temperature cycles will cause progressive growth of the crack until the slab of rock breaks free in a rockfall and concluded that the warmest times of the day and year are particularly conducive to triggering rockfalls. Their study is published today in Nature Geoscience and has other scientists concerned that these rockfalls will occur more frequently as the planet warms.

A little fishing rights can go along way, according to a paper published today in the Proceedings of the National Academy of Sciences. Researchers looked at data from 4,713 fisheries around the world that represent 78 percent of global fish catches. They discovered that if we continue catching fish as usual, the health of the oceans’ fisheries will go from bad to worse. However, if we take some simple action now for better fishing practices, global fish populations could double by 2050. The authors say that if reforms were implemented today, the percentage of fisheries in the world that are considered biologically healthy would grow from around 47 percent today to 77 percent within just 10 years.

One of those reforms? Fishing rights. Fishing rights end the desperate race for fish by asking fishermen to adhere to strict, science-based catch limits in exchange for a right to a share of the catch, and are already being used to great effect in places like Australia, Belize, Chile, Denmark, Namibia, and the United States. Seafood is essential to the three billion people worldwide who rely on it as a key source of protein, so protecting our fish populations will have repercussions for many people around the globe.

The Academy’s Iria Fernandez-Silva is serious about sea cucumbers, close relatives of sea urchins and starfish. “It’s easy to underestimate the sea cucumber. Sea cucumbers look goofy, move slowly, and barf up their guts when startled, but these invertebrates are superstar ocean cleaners that are hugely important to marine ecosystems.” So Fernandez-Silva and her colleagues are sequencing some of the species’ genomes to learn more about sea cucumbers’ biology, natural histories, and ability to adapt to the modern threats of pollution and overfishing for food and medicine.

Their recent study, published in Conservation Genetics, “looks into the genetics behind the economically-important species Holothuria edulis so we can understand the pressures they face and help protect threatened sea cucumbers globally,” she says. “We saw low genetic diversity in some sea cucumber populations along Okinawa’s eastern coastline, where water is polluted by nearby industry, runoff, and coastal development. In contrast, populations in more pristine sites on the island’s west coast were more genetically diverse. Since populations appeared disconnected from one another, we can predict that overfishing might be the last straw for vulnerable sea cucumber populations ill-equipped for a comeback.” She hopes these genetic findings are red flags for stressed marine fisheries, and urge Okinawan officials to help study, monitor, and protect sea cucumbers as valued marine ecosystem-cleaners.