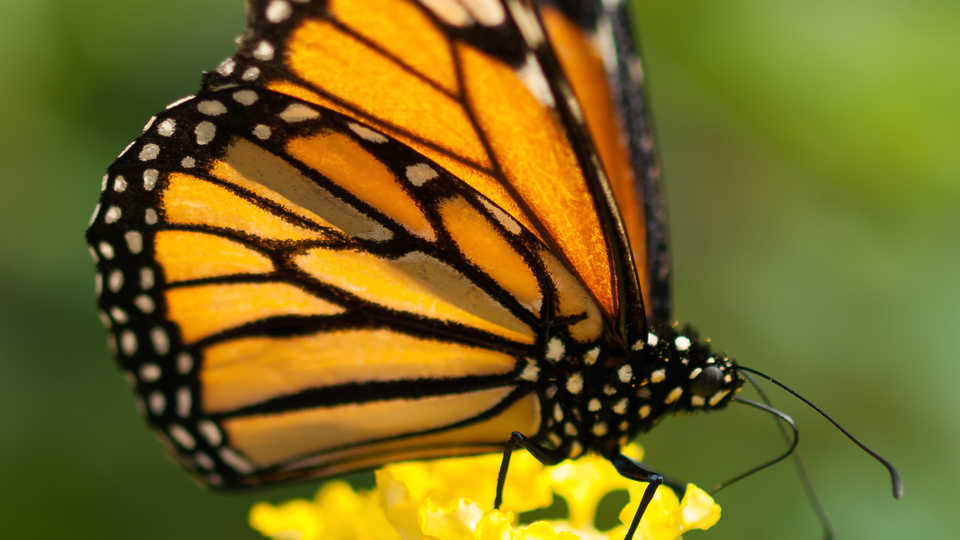 For those of you not interested in measuring circles, or math, or pies, for that matter, today, Happy #LearnAboutButterfliesDay! (Not Pi Day.) Other creatures have their own days, or weeks even, so why not beautiful, fascinating, important butterflies? We’re celebrating by sharing some good news about monarch butterflies.

Monarch butterflies have one of the most impressive migrations of any insect, or even animal. Each fall, they head south, covering up to 2,800 miles (4,500 kilometers) to their overwintering sites. In the spring, they return to their northern homes. Both migrations happen over several generations. However, monarch numbers have seen steep declines over the last few decades.

But recently, the World Wildlife Foundation Mexico reported an increase of overwintering monarchs in Michoacán and the State of Mexico. In fact, the insects’ seasonal habitat shows a 69% increase in the area they occupied this year in relation to last year’s winter. The forest area where the butterflies congregate serves an indirect indicator of the number of monarchs that come to Mexico.

Local and governmental efforts to protect the insect appear to be successful. In addition to promoting the planting of milkweed and the reduced use of herbicide along the butterflies’ migration route in the U.S., the farming (or ejidos) and indigenous communities of the Monarch Reserve in Mexico have worked to drastically decrease deforestation rates and forest degradation due to illegal logging in the wintering sites.

West Coast overwintering monarchs seem to be faring just as well, according to the Xerces Society. Surveys of monarch butterfly winter sites here in California show that there are more monarchs overwintering this year than last. Citizen scientists with the Western Monarch Thanksgiving Count visited 187 sites and tallied a total of 271,924 monarchs. While it is good news, the number of monarchs counted this year is but a fraction of the 1.2 million recorded in the late 1990s.

Fifteen California sites that have been continuously monitored had the highest numbers of butterflies in a decade. Several sites that had not seen monarchs for years were occupied, and there were a number of sites, such as the Berkeley Aquatic Park, that hosted overwintering monarchs for the first time. In Marin County, in the northern extent of the overwintering range, eleven sites had increased numbers and two new sites each supported more than 8,000 butterflies.

But not all locations saw increases. Patrick Whitehurst from the Pacific Grove Natural History Museum said by email, “Our numbers were actually down this year compared to last year. More than 24,000 monarchs were observed during the 2014 Thanksgiving count, which observes monarchs at a number of Monterey County locations. This year, just over 11,000 butterflies were recorded by volunteers with the Pacific Grove Museum of Natural History—less than half from the year before. What that tells us is that the monarchs were around; they just weren’t at the Sanctuary and instead overwintered at other sites. New sites, such as a couple near Santa Cruz, were found this year that had not been observed before.”