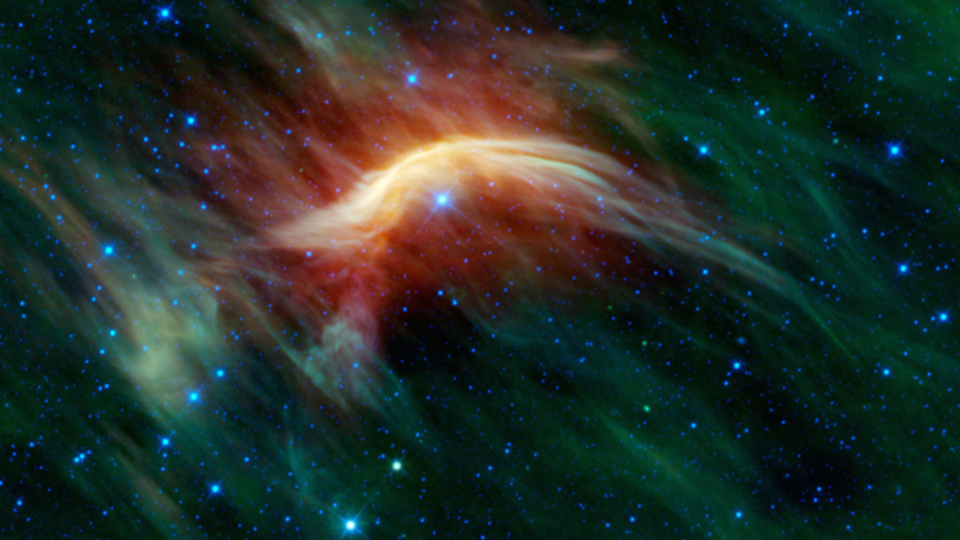 Looking up at the night sky, generations of stargazers have observed the same constellations for millennia. The stars rise and set every night, appearing remarkably constant from our human perspective…

But astronomy has revealed a much more changeable stellar vista: stars that vary over time, stars that wink out every couple decades, and stars that frankly just misbehave. At the 227th Meeting of the American Astronomical Society (AAS) held this week in Kissimmee, Florida, we have learned about stars that race recklessly through space and others that have explosive outbursts that can be observed from millions of light years away.

William T. Chick from the University of Wyoming reported on a search for hundreds of “runaway stars” moving at supersonic speeds through interstellar space (quite unlike the Sun, which basically goes with flow in its orbit around the galactic center). Some of these snowplow material in front of them, creating bow shocks (think of sonic booms in space) that can be observed in infrared light. By looking for these bow shocks in archives of data from the Spitzer Space Telescope and the Wide-field Infrared Survey Explorer (WISE), Chick and his team then used follow-up observations to track the shocks back to the stars causing them.

The loveliest example is zeta Ophiuchi, a star twenty times as massive as our own sun and five times as bright. An extraordinary image released back in 2011 shows ghostly veils of material perturbed by the rapidly-moving star, and although newly-released images from both Spitzer and WISE don’t have quite the same aesthetic appeal, they nonetheless showcase several more examples of the phenomenon.

So, how do you accelerate stars to supersonic speeds? According to Chick, stars can get tossed out of star clusters or receive a kick from an explosive companion. After getting a gravitational boost, these stars end up flying faster than their neighbors… And some of them create bow shocks that give away their locations on their supersonic joyrides!

The star system V404 Cygni fits into a different category of misbehaving stars, increasing in brightness dramatically and unpredictably every few decades. Until this past summer, its most recent temper tantrum occurred in 1989, but the American Association of Variable Star Observers (AAVSO)just announced their role in studying V404’s renewed activity: late last summer, NASA’s Swift satellite detected a burst of high-energy x-rays emanating from the system, alerting both professional and amateur astronomers around the world to pay attention.

With hundreds of instruments pointed at V404, astronomers were able to observe the outburst across the entire electromagnetic spectrum. After the 1989 event, evidence had mounted that V404 consists of a black hole and a sun-like star in orbit around one another. Typically, we think of this kind of pair cranking out the most energetic wavelengths of light (cf. those aforementioned x-rays), but it turns out that we can also learn a lot from more modest visible light. Amateur astronomers, for example, observed visible-light flickering, likely due to x-rays heating up gas around the black hole.

As far as ill-mannered stars go, however, eta Carinae holds the record in the Milky Way Galaxy. For most of human history, it appeared as a middle-of-the-road star (the seventh-brightest star in the constellation Carina), but for about a week in 1843, it actually became the second brightest star in the entire sky! And it then faded dramatically, so much so that it couldn’t be seen without a telescope. Eta Carina, too, is a binary system, but instead of a sun-like star and a black hole, it also includes two ginormous stars—the smaller one about 80 times as massive as the Sun and larger one more than 100 times as massive as the Sun! Images from the Hubble Space Telescope (HST) reveal a star that seems to be tearing itself apart, and astronomers suspect that eta Carinae will eventually go supernova (“soon” in astronomical terms, but we humans shouldn’t hold our breath).

At this week’s AAS meeting, Rubab M. Khan of NASA’s Goddard Space Flight Center described the discovery of five stars that resemble eta Carinae—albeit not in our own Milky Way Galaxy! Astronomers tend to think of eta Carinae as unique, but we just had to look farther from home.

The five stars reside in galaxies tens of millions of light years away: the galaxies M51, M101, and NGC 6946 are each home to a single eta-Carinae-like star, and two of the misbehaving stars appear in the galaxy M83. These four galaxies are in fact “the major supernova producers in the local 30 million light years,” according to Khan, which means they are forming stars much more rapidly than their neighbors in a sizeable volume of space.

To find eta Carinae analogues, the team scoured galaxies for infrared emission from warm dust that follows a characteristic pattern. The search begins by looking for a distinctive increase in brightness over a certain range of infrared wavelengths; if that brightness peaks in slightly longer wavelengths, the team then checks in visible light using HST. If the three observations fit the eta Carinae pattern, then they have a match! Only five objects passed the test, which suggests to Khan that “eta Carinae is not unique, but very, very rare.”

The constancy of stars in the night sky shouldn’t deceive you! Misbehaving stars have a lot to tell us about some of the most spectacular phenomena in the universe around us.