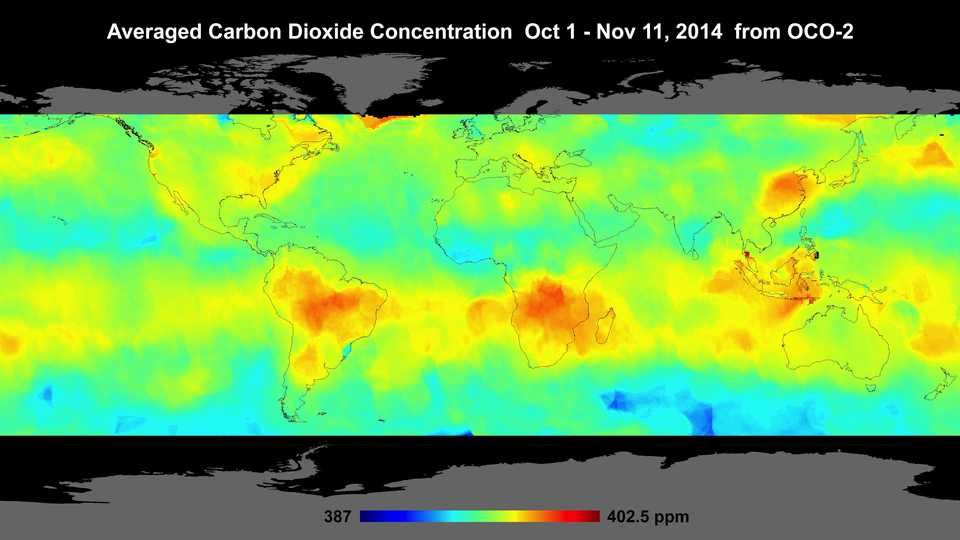 This is what carbon dioxide, CO2, looks like from space.

This image represents the first results from NASA’s Orbiting Carbon Observatory-2 (OCO-2). Launched this past July, the satellite is in orbit around the Earth, monitoring global carbon fluxes from both natural and human causes.

The original Orbiting Carbon Observatory experienced a launch failure in 2009—thus the “2” in the new satellite’s title—and though the scientific portion for the new spacecraft is only two months in on a two-year mission, scientists presenting at last week’s American Geophysical Union (AGU) meeting in San Francisco are very excited about the data and forthcoming observations.

The satellite collects hundreds of thousands of measurements across a narrow swath of Earth each day and the key to these observations is precision and accuracy. The satellite is expected to sense CO2 levels at an accuracy of to one-to-two parts per million, giving an incredibly detailed picture of our atmosphere, and ultimately, the health of our planet. The data the OCO-2 team collects will also help tease out sources of CO2 emissions, from natural processes, to industry, to biomass burning.

Much of these first months have been focused on testing the equipment onboard OCO-2. The satellite initially took detailed measurements in locations with excellent ground-based CO2 sensors, and the team is now calibrating the equipment and rewriting algorithms to make sure that OCO-2 returns the most accurate data possible.

In addition, another sensor on board OCO-2 measures solar-induced chlorophyll fluorescence. The instrument can measure the CO2 that plants uptake as part of photosynthesis. During this process, plants also release oxygen, fluorescing brightly enough to be visible from space and observable by OCO-2. Understanding the roles that plants—both natural and agricultural—play in the carbon cycle can help the scientists get a better idea of what’s going on in the atmosphere.

In the image below of fluorescence data taken from August through October of this year, the transition from the growing season to the dormant season in the northern hemisphere is quite obvious, with greater fluorescence, greater carbon uptake, and less emissions. A constant pattern over the rainforests of the world also is evident. (And more information on this map can be found here.)

The team is excited to really put OCO-2 to work over the coming months, noting that although there will be early data released at the end of the month, data coverage, precision, and resolution will improve with time and will provide key data and accurate measurements of carbon dioxide—and our planet’s warming.