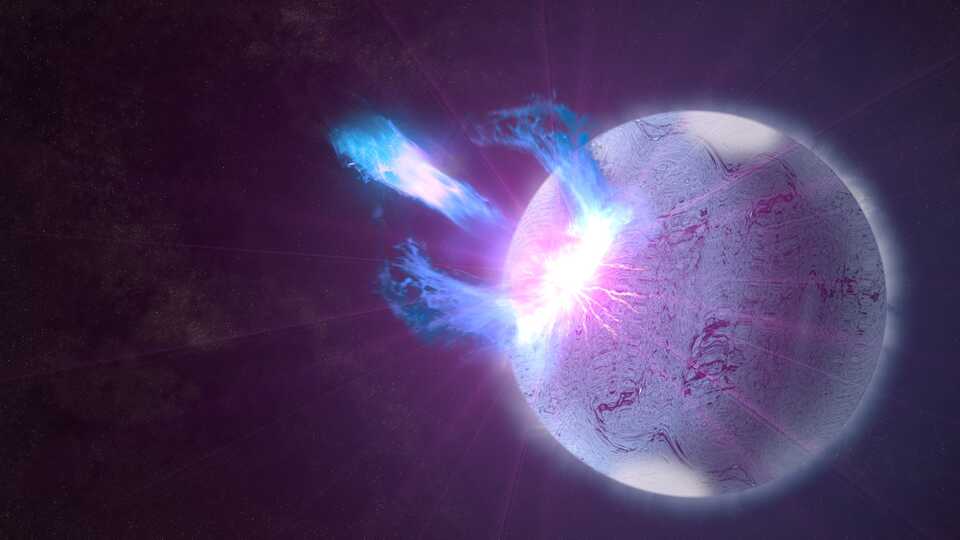 An artist’s rendering of a rupture in the crust of a highly magnetized neutron star known as a magnetar. (Courtesy of NASA’s Goddard Space Flight Center and S. Wiessinger.)

In my post yesterday about the 237th meeting of the American Astronomical Society (AAS), I talked a bit about how awesome pulsars are! Especially if you want to use millisecond pulsars as extremely precise clocks—for example, to measure the amount of dark matter in our galaxy or the effect of gravitational waves jiggling space-time throughout the Universe.

A particularly rambunctious cousin of a pulsar, known as a magnetar, made news during the Wednesday AAS meeting. The big news? Astronomers have observed a magnetar outburst in a nearby galaxy—an outburst that’s shedding light (so to speak) on some extremely energetic phenomena in the Universe and perhaps defining a whole new category of objects.

So, first some background on terminology and classification…

Pulsars and magnetars are both types of neutron stars, which are basically the cores of giant stars left over when the stars themselves go kablooie in events called supernovae. All neutron stars (as I hinted at yesterday) are small, as stars go—about ten kilometers (seven miles) across, which is the size of San Francisco, except, well, spherical and without the hills. All neutron stars spin pretty quickly, although some spin much faster than others. And most neutron stars have beams of material (astronomers like to call them jets) that emanate from their poles, channeled by strong magnetic fields.

Magnetars are another type of neutron star, with insanely strong magnetic fields (get it?) that cause them to become quite feisty and occasionally flare up with incredible results.

To understand the magnetar announcement, it helps to create a mental image of a neutron star. If you are able to picture a star the size of San Francisco, then you’re not only lucky to have a great imagination, but you’re on your way to wrapping your head around these strange objects! The next thing you need to imagine is that said sphere with a diameter of the size of San Francisco actually contains as much 1.5 times the mass of the Sun. (BTW, that’s about half a million times the mass of Earth. So just imagine the mass of the entire planet you live on compacted into a sphere the size of San Francisco, then, you know, make that half a million times denser. Simple enough?) That’s so dense that a teaspoonful of neutron star material would weigh about ten million tons.

It also means that the gravitational pull of the neutron star on its surface is ginormous—about 100,000,000,000 times that gravity you experience at Earth’s surface. (And fun fact! The escape velocity from the surface of a neutron star is about a third the speed of light.) That’s why this sphere the size of San Francisco would not be graced with our fair city’s lovely topography. Hills would get flattened!

Finally, as I mentioned yesterday, some pulsars are rotating nearly a thousand times a second. But I won’t ask you to imagine that, don’t worry. Instead, just imagine that ten-kilometer diameter sphere containing the mass of the Sun rotating at, say, a few times a second. That’s more of a typical neutron star—not one of the millisecond pulsars we talked about yesterday.

Aside from their size, one thing these objects have in common with San Francisco is the prevalence of earthquakes—or in this case, starquakes. A neutron star has a crust much like Earth, likely coated in a layer of iron nuclei. Couple that with the intense magnetic fields of a magnetar, and you’re in for some astonishing behavior.

Earth’s magnetic field changes over time, with the north and south poles meandering (and occasionally flipping), and the same thing happens on a magnetar. But when a magnetar’s magnetic field rearranges itself, it creates the aforementioned starquakes—and intense flares! Material explodes off the surface, releasing a burst of radiation that we detect as gamma rays.

Light that we see is pretty energetic, and light of a higher frequency than we can see—ultraviolet light, a little less than ten times as energetic as visible light—can cause painful sunburns. Even higher frequencies carry even higher energies, so x-rays, carrying about a thousand times the energy of visible light, are even more damaging—that’s why the dentist puts a lead apron on you and exits the room when you get your teeth x-rayed. Gamma rays? They’re tens of millions times more energetic than the light we see! And that’s why exposure to gamma rays can turn you into a giant green monster with anger issues (at least in comic books).

In the announcement on Wednesday, astronomers described a magnetar outburst they discovered in the Sculptor Galaxy, which lies about 11 million light years away (relatively close by, in this context). The explosion of gamma rays looked like what astronomers typically catalog as a Short Gamma Ray Burst (SGRB). But most SGRBs are at much, much greater distances—caused by much more energetic events! Namely colliding neutron stars, which make gamma-ray-emitting magnetar flares look pretty anemic by comparison. According to Nicola Omodei from Stanford University, colliding neutron stars emit about a million times as much energy as a magnetar flare.

But that got astronomers thinking…

What if this magnetar flare in the Sculptor galaxy isn’t so special? Yeah, it’s the first example of a “SGRB” (with a deliberate use of quotes) that astronomers have definitively identified as a magnetar flare, but maybe more “SGRBs” are actually caused by temperamental magnetars? At Wednesday’s press conference, Kevin Hurley from the University of California, Berkeley, said they’ve estimated that a few percent of events classified as SGRBs could actually be magnetars flaring up.

So… Creating a new class of Gamma Ray Burst by masquerading as a bigger, more powerful cosmological event? Not bad for a rapidly-spinning star the size of San Francisco, infused with an intense magnetic field and experiencing explosive starquakes! 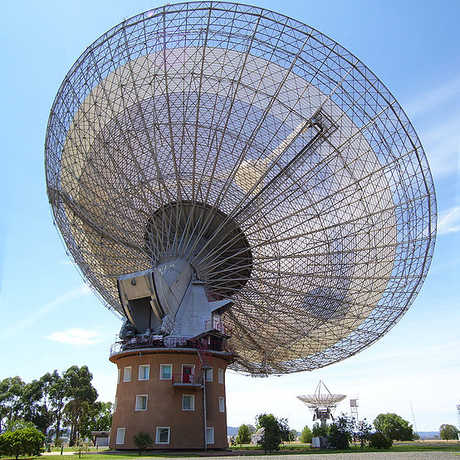 Fast Radio Burst Mystery
The newest cosmic mystery: four distinct high-energy flashes! (Is the Universe trying to get our attention?) Astronomers are calling them Fast Radio Bursts, but we have yet to determine their origins. 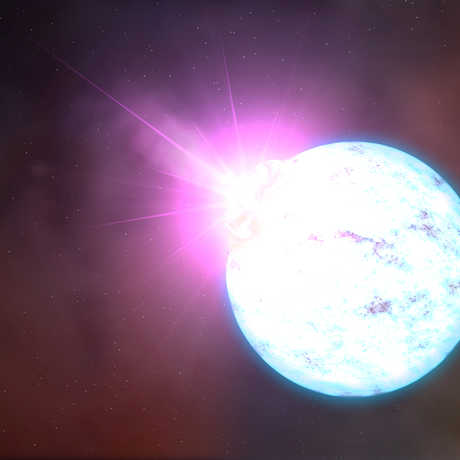 Your hub for astronomy news, sky-watching tips, and more from the Morrison Planetarium team.