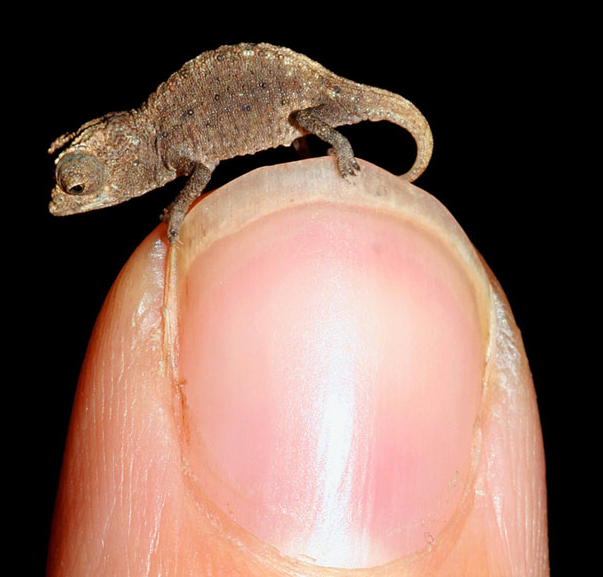 Let’s get our week started with some really cute news—scientists discovered four new species of teeny, tiny chameleons in Madagascar and described them in PLoS ONE.

Their eyes move independently of each other to zero in on a tasty meal, they can also rapidly change their colors when stressed, have long projectile tongues and prehensile tails that can grasp objects.

These lizards, just tens of millimeters from head to tail, and in some cases small enough to stand on the head of a match, rank among the smallest reptiles in the world.

The researchers who made the discovery, led by Frank Glaw of the Zoological State Collection in Germany, conducted genetic analysis to determine that the mini lizards, although similar in appearance, are in fact distinct species. The smallest of the new species, Brookesia micra, was found only on a very small islet called Nosy Hara, and the authors suggest that this species may represent an extreme case of island dwarfism.

island dwarfism, by which animals slowly shrink in size, is perhaps in response to the limited resources available on an island.

And New Scientist offers why this occurs rarely, even among island populations:

…warm-blooded animals cannot function if they are too small, because they lose too much heat through their body surface. Cold-blooded animals, like reptiles, take up heat from outside their bodies rather than generating it within themselves.

“The extreme miniaturization of these dwarf reptiles might be accompanied by numerous specializations of the body plan, and this constitutes a promising field for future research,” says Glaw. “But most urgent is to focus conservation efforts on these and other microendemic species in Madagascar which are heavily threatened by deforestation.”