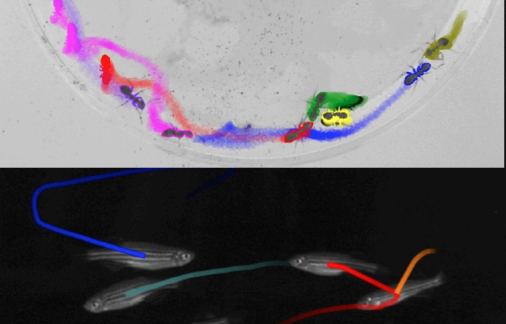 Within a crowd of people, following an individual can get tricky—at least that’s how it always works in spy thrillers. Imagine trying to do the same thing with a colony of ants or a school of fish! It seems nearly impossible to track a single creature in a moving crowd of nearly identical members.

For scientists studying individual animals’ behaviors in group settings, it’s definitely problematic. Scientist Gonzalo de Polavieja studies the rules of group behavior in mice and zebrafish. But to determine how information is shared, how consensus is reached, and how the creatures establish overall hierarchy, he and his team need to identify individuals. Video tracking helps, but de Polavieja found many errors in following a single animal.

Necessity is the mother of all invention, or so the saying goes. So de Polavieja and his colleagues invented a fully automated software package that computes a unique visual fingerprint—based on pixel values and their distances in isolated animal images—for each animal in a video recording of an animal group.

Even if they hide or temporarily disappear from the scene, these fingerprints are recognized by the program when they enter the scene again. These fingerprints can also be tracked across different videos and can even differentiate “nearly identical individuals, including size-matched unmarked siblings and animals from inbred populations,” according to the study, published this week in Nature Methods.

“From now on, we will be able to quantitatively determine the rules of animal behavior in groups taking into account the individuality of each animal,” says de Polavieja. “We have done tests with fish, flies, ants, and mice but it can be applied to other animals.”

Which animal will you track? The software, called idTracker, is available for download here. Maybe it works on spies, too…