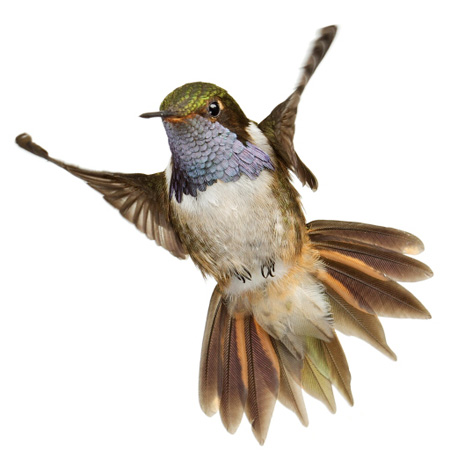 “Everything about hummingbirds is extreme. They have this incredible hovering flight, with wing beat frequencies of 60 times per second, which is nuts. They have the highest metabolic rate for their size of any vertebrate; they are little machines that run on oxygen at a high rate. They also have the largest hippocampal formation in the brain of any bird, which is tied to spatial learning, presumably because they visit the same flower clusters over and over again, and must remember where and when they most recently slurped the nectar from individual flowers. It is amazing that evolution can take an animal to such extremes.”

That’s UC Berkeley herpetologist Jimmy McGuire in awe over tiny birds. And no, herpetologist is not a typo. While McGuire’s specialty is amphibians and reptiles, his love and passion for hummingbirds has taken him well beyond herps.

McGuire and his Berkeley colleague, Robert Dudley, published a paper last week on the extreme evolution of hummingbirds. It’s an amazing tale that takes the small birds from one continent to another and then back again, diversifying and evolving over millions of years. And they’re not done yet.

Using DNA data collected from 451 birds representing 284 species of hummingbirds and their closest relatives, McGuire and his colleagues arranged the living groups in a family tree, and concluded that the branch leading to modern hummingbirds arose about 42 million years ago when they split from their sister group, the swifts and treeswifts. This probably happened in Europe or Asia, where hummingbird-like fossils have been found dating from 28-34 million years ago.

Somehow, McGuire says, hummingbirds found their way to South America, probably via Asia and a land bridge across the Bering Strait to Alaska. They left no survivors in their ancestral lands, but once they hit South America about 22 million years ago, they quickly expanded into new ecological niches and evolved new species represented by nine distinct groups known today as topazes, hermits, mangoes, brilliants, coquettes, mountain gems, bees, emeralds, and the single-species group Patagona (the Giant Hummingbird, Patagona gigas).

About 12 million years ago, the common ancestor of the bee and mountain gem hummingbird groups made the jump into North America—at the time, still separated from South America by a few hundred miles of water. Once these hummingbirds found success in the new habitat, other hummingbird lineages followed their cousins northward.

About 5 million years ago, hummingbirds invaded the Caribbean, and did so five more times since. One of these groups, the bee hummingbirds, which originated in North America, participated in the Caribbean invasion, and even re-colonized South America alongside existing lineages.

The genetic analysis shows that the diversity of hummingbirds continues to rise today, with the origination rate of new species exceeding extinction rates. And despite the fact that they feed primarily on nectar and tiny insects, some places contain more than 25 species in the same geographic area.

“When it comes to vertebrate animals, hummingbirds are about as diverse as they come,” McGuire says.

One unanswered question, he says, is how hummingbirds got a toehold in South America at all, since today they are dependent on plants that co-evolved with them and developed unique feeding adaptations.

The research is published in Current Biology.