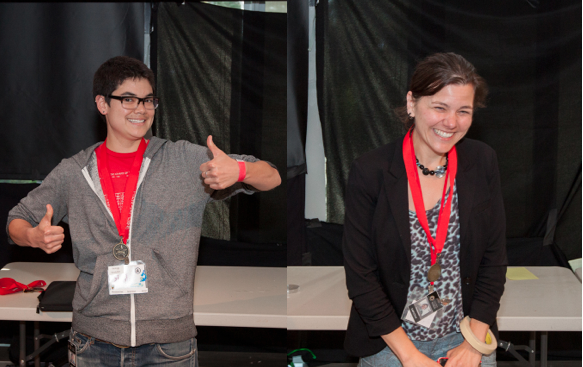 You probably know that the Academy, in addition to being a museum dedicated to teaching science, also has dozens of researchers who actually do science. But did you know that we also hack science here?

Last month, the Academy was host to Science Hack Day SF 2013. Hackathons started in the software industry years ago, and expanded into music and art six or seven years ago. The first Science Hack Day started in London in 2008. “The idea behind hackathons is to have a 48-hour lock-in, disseminate ideas, and then have a competition,” says the Academy’s Digital Learning Specialist (and 2013 Hack Day co-organizer), Matt Ganucheau. “They were typically corporate, but now have become something bigger.”

When he says "bigger," Ganucheau is referring to 20 different Science Hack Days that take place around the world, with a couple hundred participants at each event. These events are the brainchild of local Champion of Change, Ariel Waldman, who has worked tirelessly to find funding for, and organize, these global events.

Last month’s event was Ganucheau’s first foray into a science-related hack—he had participated in art and music programs previously. Through his experience, he sees the importance of hacking science. “We have this weird cultural thing about playing with science,” he says. “There’s a shift that’s needed and these compressed creative hacking environments are perfect. Scientists tend to be more introverted than musicians and artists—they don’t play as much. Hack Day is like a scheduled playdate for them.”

Two Academy staffers—Kira Hammond, an engineer and media specialist for the Visualization Studio, and Shayle Matsuda, a graduate student and assistant in both the Invertebrate Zoology and Geology department and Teacher and Youth Education department—couldn’t agree more. “I thought it would be a chance to meet fellow makers,” Hammond says. “And the company and camaraderie at Hack Day was really nice.”

Matsuda and Hammond both brought their own projects to Hack Day, but it’s not required. You don’t even need to be a scientist, maker or engineer to join in. “It’s for everyone,” Ganucheau explains. “Even the most low-fi person can participate.”

When participants sign up, they join a wiki space to start talking about ideas and projects weeks before the event. Hammond had been working on a cheap, personal planetarium idea, to give people around the world access to educational astronomy content. She sketched out the plan, but felt she didn’t have the skills to construct something. So she put the idea up on the wiki about a week prior to the event.

Matsuda studies the morphology of nudibranchs—charismatic sea slugs that are important to the health of reefs worldwide. Inspired by a Ted Talk about the math (and crocheting) of corals, Matsuda began to wonder if 3D imaging might work to study the geometry of soft-bodied organisms like nudibranchs. These sea slugs eat sponges and corals that contain toxins, and the sea slugs boost their defense against predators by using the toxins as their own. Could 3D imaging reveal a relationship between geometry and the types of toxins nudibranchs store?

Why not hack the technology, the Academy’s Dean of Science, (and nudibranch expert) Terry Gosliner suggested. Matsuda placed the idea on the Hack Day wiki page almost immediately.

On the morning of day one of Hack Day, Matsuda and Hammond presented their ideas, rallying volunteer hackers for assistance. They both admit that the process was a bit intimidating. “They kind of threw us out there,” Matsuda says.

Within a few hours, both had help in putting together their projects. Matsuda lured hacking partners with live nudibranchs and a big challenge: “I knew we needed to image the sea slugs while they’re alive and moving, in or through water, and most of these animals are shiny and translucent—super hard for imaging.”

Hammond discovered two enthusiastic team members in Tess Mayall and Bilal Mahmood. Working together they faced challenges in camera lenses (“There’s no substitute for a real fish-eye lens,” Hammond says), a portable dome (they worked with umbrellas) and easy to use software and devices (including iPhones and other smart phones, tablets and laptops). In the end they brought the pieces together and constructed it with a laptop using a free, open source French software. Their biggest roadblock may not surprise you—adaptors to connect the various pieces of technology. “We tried 50 different adaptors and couldn’t find the right one. Everyone could relate,” she says.

Matsuda’s tools were similarly rudimentary—an iPhone in a ziplock bag and varying sizes of buckets. By the end of day two of Hack Day, the team had a preliminary image of a nudibranch.

While their projects were far from complete by the end of the weekend, both team Matsuda and team Hammond won awards. Hammond took home the coveted “Judges Would Like to Own” prize; and Matsuda won the “Please Keep Going” award. And they both plan to continue with their projects. Matsuda is using the contacts made at Hack Day and meeting with technology developers about making this type of 3D imaging a reality. “I look at Hack Day as the kick off for this adventure.”

Hammond says Hack Day inspired her to continue with the project, too. “I’ve written to optics and electronics companies to see how they can help,” she says. She sees potential in an inexpensive planetarium for educators here as well as in schools in developing countries.

And both innovative award-winners look forward to future Hack Days. “I was so surprised to be included with such amazing projects,” Matsuda says. Hammond will be back next year, without her own project, but participating in someone else’s. Who knows how their hacks—current and future—might save the world. Why not join them?