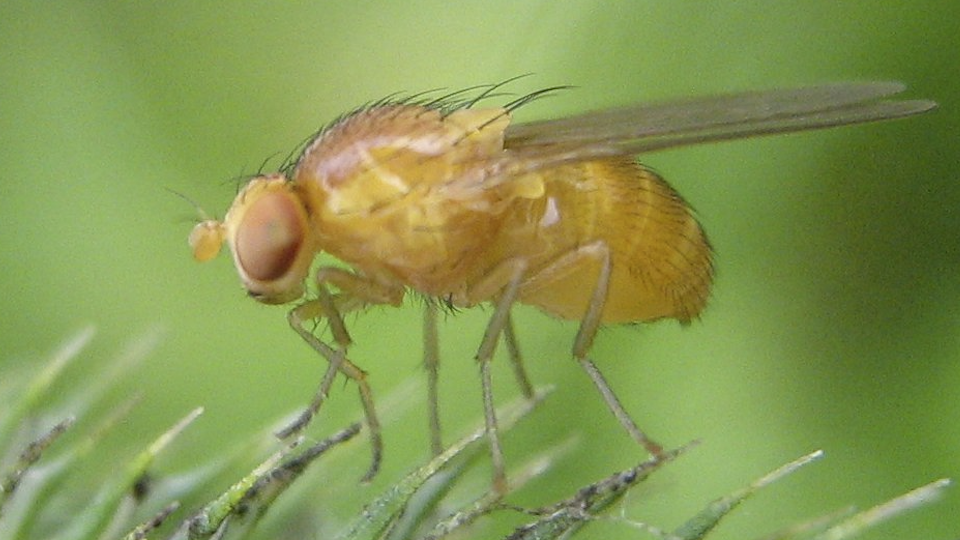 Yvette Fisher has a personal interest in spatial perception. In between neuroscience classes as an undergraduate at UCLA, she played competitive Ultimate Frisbee, a sport that’s all about hand-eye coordination. In addition, she found time to do research in a lab studying Huntington’s and Parkinson’s diseases in human patients. Now, Fisher is a graduate student, where she focuses on something a little smaller than a human or a frisbee, but equally interesting: Drosophila melanogaster, or the fruit fly.

The neuroscience lab at Stanford where Fisher spends her days has a lot of the equipment you’d expect to see: microscopes, sterile instruments, computers. In order to measure neural activity, Fisher actually removes part of a flies’ “skull” (really a carapace, to the discerning entomologist) to expose their tiny brains. Under a microscope, she then glues them to a tiny hole, such that the exposed brain is visible above, but their eyes, and “face,” are below, able to watch whatever Fisher projects onto a tiny TV screen.

Fisher does all of this in order to get at how Drosophila perceive motion. On that tiny screen, she shows the flies moving bars, both horizontal and vertical. Fisher’s flies have a gene pathway for a protein that emits light whenever a neuron is actively releasing calcium, a signaling molecule. In almost complete darkness, Fisher took measurements of previously identified neurons (named simply T4 and T5) sensitive to motion detection. When the neurons released calcium, the special protein would lock onto the calcium and fluoresce, and Fisher knew the flies had seen something moving. Sounds fun, right? “Not after you have to do it a hundred times,” laughed Fisher.

But there was a problem. When she moved vertical bars vertically, or horizontal bars horizontally, her tiny subjects weren’t producing any visual signal at all. She thought something was wrong and went to her advisor, Tom Clandinin, also at Stanford. Working together, they came up with an idea: what if this wasn’t a flaw in the experiment, but a feature of the brains of the flies? What if Drosophila’s neurons were more likely to trigger when seeing horizontal bars moving vertically, or vertical bars horizontally?

This was exactly the case, it turns out. In a paper published last month in the journal Neuron, Fisher outlines how she saw the T4 and T5 neurons triggered by looking at strong edges, and, as she states, “the best way you can see it move is in the plane orthogonal to its edge.” To really get a sense of how this works, imagine you’re on an airplane, looking out the window at the horizon. What you see is moving, but it’s hard to tell, unless the horizon is going up or down. Then you know you and the plane are, too.

The researchers learned that the strongest signals were triggered by edges of objects, modeled by the vertical bars, and that fruit flies are able to distinguish these edges when they were perpendicular to the way they were moving. It also confirmed a particular model of neural computation, or how the flies process the data through their small but efficient brains. Why edges trigger such a strong response is a deep question, says Fisher. Still, she has a personal theory. “The world is not made up of dots,” she says, “it’s made up of pretty big things. It’s useful to look for those edges because that’s where you’ll hit them!” Want to avoid a car, saber toothed tiger, or other moving obstacle? Recognizing where it begins and ends, and how it moves, can be evolutionarily advantageous.

These fruit flies provide a simplified model of neural activity that we can scale up to understand the motion detection systems of creatures with more complicated brains, like humans or other mammals. “I’m pretty convinced that the nitty gritty of how neurons talk to each other, something we don’t really understand, will help people in the long run,” she says. Fisher’s undergraduate research, into human brain diseases, had more tangible impact on humans, but lacked clear cut answers. Looking at the brain of a mouse, often used as a human brain model, was “a little more of a jungle” compared to a fruit fly brain, where things are “a little more simple, and a little more straightforward,” continues Fisher. And while she’s not working with humans anymore, Fisher knows that she still has an impact on the bigger problems that face her species. “The answers to those things,” she continues, referring to cures for Huntington’s and Parkinson’s diseases, “will be down in the nuts and bolts of where I’m working.”

Fisher’s measurements of Drosophila brains indeed has some direct connections to larger animals. In a fruit fly, there are four subtypes of the T4 and T5 neurons that capture motion in the four cardinal directions. This physical mapping of neurons to specific directions is similar to what Arseny Finkelstein of the Weizmann Institute of Science in Israel measured in bats last year. It seems that every animal has similar methods to map their surroundings. Sadly, Fisher has yet to teach any Drosophila to play Ultimate Frisbee, but she did give a TED-style talk to her teammates last year, outlining what neural processing goes into catching and throwing a disc. With such defined edges, a Frisbee looks a lot like a horizontal bar in motion, something our brains (and fruit flies’) are fine-tuned to perceive. 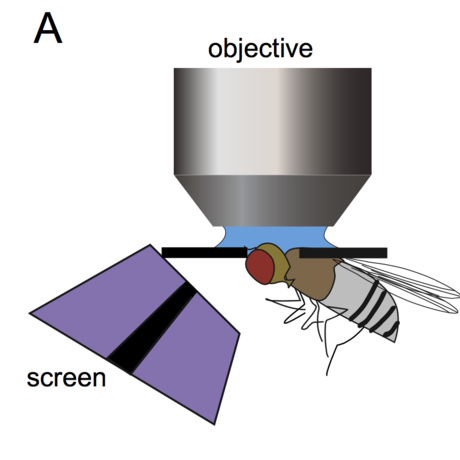