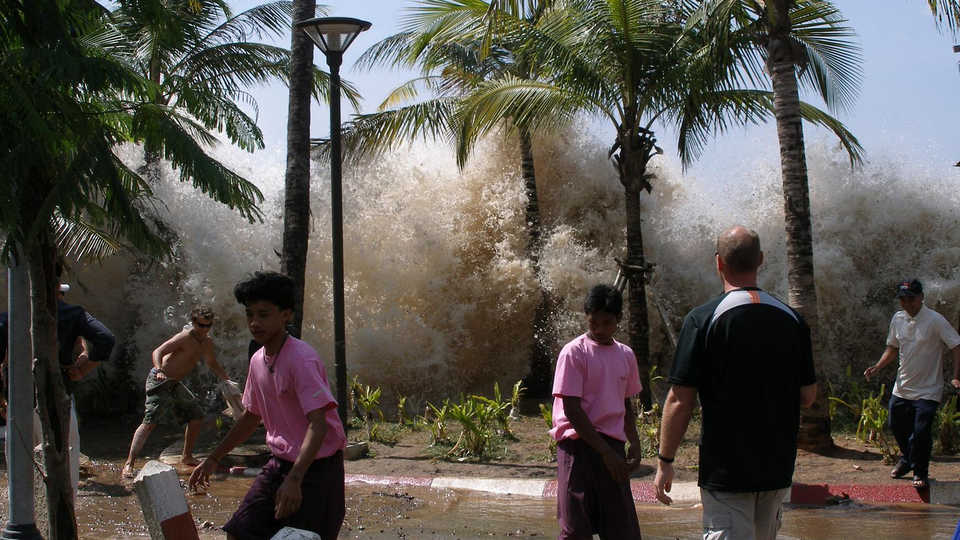 Over the past ten years, we’ve seen the damage tsunamis can wreak. The 2004 Indian Ocean tsunami (which occurred ten years ago today) killed over 230,000 people, and the large 2011 Tōhoku earthquake in Japan left 20,000 dead—90% of those due to the subsequent tsunami.

The United Nations puts the potential risk of exposure to tsunamis at 60,000 people and $4 billion dollars in assets. So it’s no surprise that improving tsunami forecasting—with increased accuracy and speed—is cause for international collaboration. At last week’s American Geophysical Union (AGU) meeting in San Francisco, several scientists discussed the past, present, and future of tsunami forecasting.

When Sri Lankan scientist Charitha Pattiarachi experienced the 2004 tsunami, he thought the worst was over after the first two or three waves. But one to two hours and several larger waves later, they were still coming. In fact, according to a tide gauge he helped establish three months prior to the tsunami, the biggest waves came nearly three-and-a-half hours later. But where did they come from?

Pattiarachi says his colleagues have now established these later waves were reflected waves—they hit the island chain of Maldives and came back, taking over three hours to return. Western Australia observed a similar phenomenon: 18 hours after its first waves, the area received more reflected from a ridge in the Indian Ocean near Madagascar. This new understanding of reflected waves can help predict the duration of future tsunamis.

Kenji Satake discussed the lessons learned from the 2011 tsunami in his native Japan. Within minutes of the large earthquake, Japan issued a tsunami warning. However, the size of both the earthquake and tsunami were underestimated; an updated warning issued within 20 minutes did not reach affected coasts. In light of these issues, the Japanese government is creating more cable networks to measure earthquake and tsunami size more effectively, expanding the current number to 150 stations.

Vasily Titov of the National Oceanic and Atmospheric Center (NOAA) described the large network of buoys NOAA uses to measure and model tsunamis. (Titov, BTW, worked with the Academy on the 2012 Morrison Planetarium production, Earthquake: Evidence of a Restless Planet.) In 2004, just six of these DART (Deep-ocean Assessment and Reporting of Tsunamis) buoys were positioned in the Pacific. Today there are 60, owned and operated by the U.S. and other countries. With these buoys, plus previous tsunami analysis and tsunami modeling, NOAA can forecast tsunamis with greater accuracy and speed.

Forecasting is a cycle, he said. The team makes data available within just a few minutes of an earthquake, updating it within 20 minutes or so with newer data, allowing people within the U.S. enough time to evacuate.

But it’s not enough. NOAA wants accurate tsunami forecasting within 15 minutes or less. With new generation DART technology and better modeling, Titov said, we’re close to best-case tsunami forecasting, allowing time for everyone to evacuate, near and far.

Anniversaries allow us to look forward as well as back, and we can continue working toward a future when our communities can respond more quickly and more accurately to tsunami threats.