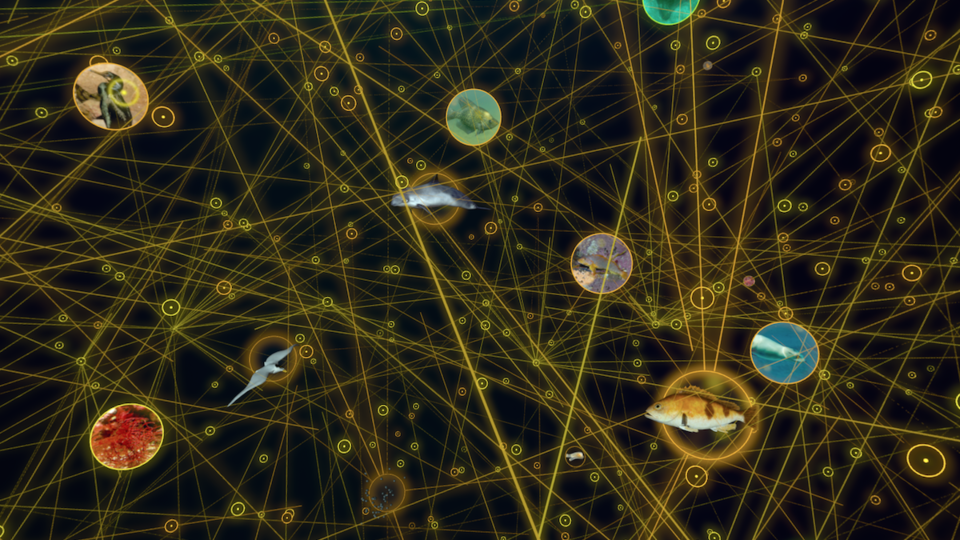 Food webs are at the heart of the new show, Habitat Earth, opening later this week at the Academy’s Morrison Planetarium—and also at the heart of Academy scientist Peter Roopnarine’s research. So it’s no surprise that Roopnarine acted as a scientific advisor on the production.

“I’m very interested in the stability and persistence of ecological networks over time,” he says. As a paleoecologist, Roopnarine studies ancient ecosystems using modern systems for ground-truthing. To that end, he’s studied modern-day coral reef ecosystems and the San Francisco Bay ecosystem.

The San Francisco Bay is featured at the beginning and end of the new planetarium show, with its complex food web visualized using data Roopnarine has collected and published over the years. And he describes the visualization as “pretty awesome… The scene takes us from the interactive human world to the seemingly calmer biological world, and slowly reveals that the biological world is also very busy with interactions.”

Roopnarine says that the production does a “great job interpreting the science,” and really appreciates the emphasis on the Bay. “It’s right in our backyard, and while we’ve studied the San Francisco Bay for years, we barely understand the ecosystems within it and how they’re changing.” He’s excited that audiences will be able to see the nature and interactions that surround us.

And the visualizations of food webs throughout the show provide a very different perspective for Roopnarine as a scientist. “I have two pictures when studying these food webs. One from my observations—when I go out and sample the fossil community or go out in the bay and look at the bay ecosystems. But the other picture of the interactions among all the groups of organisms is a combination of numbers and network diagrams and equations. The first is a static picture of small moments in time, and the other sums up what happens over time. The data visualized in the show combine both the abstract over time with what is going on in the real world.

He hopes the public will absorb the bigger picture, too. “One of the messages of this show is that the living world is a very busy, highly interactive network and economy and it’s under stress right now. Those natural economies have a direct impact on human beings, and we have to understand how they work and how well they can withstand the pressure we’re putting them under. It’s important not just for the health of the planet, but the health of human well-being, too.”

Join us this weekend for opening festivities and to see the new show!