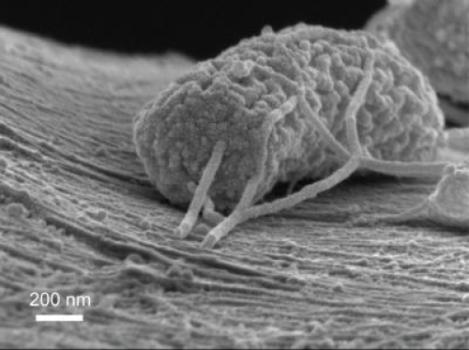 “We call it fishing for electrons.” That’s environmental engineer Craig Criddle describing a new way that he and his colleagues have discovered for generating electricity from sewage.

Brilliant, right? The Stanford team hopes this breakthrough technology will be used to harvest energy in places such as sewage treatment plants, or to break down organic pollutants in the “dead zones” of lakes and coastal waters where fertilizer runoff and other organic waste can deplete oxygen levels and suffocate marine life.

And this new power all starts with wired microbes. The mini power plants produce electricity as they digest plant and animal waste from wastewater. Right now, still in the laboratory phase, their prototype is about the size of a D-cell battery and looks like a chemistry experiment, with two electrodes, one positive, the other negative, plunged into a bottle of wastewater.

Inside that murky vial, attached to the negative electrode like barnacles to a ship’s hull, an unusual type of bacteria feast on particles of organic waste and produce electricity, which is captured by the battery’s positive electrode.

Scientists have long known of the existence of what they call exoelectrogenic microbes—organisms that evolved in airless environments and developed the ability to react with oxide minerals rather than breathe oxygen as we do, to convert organic nutrients into biological fuel.

Over the past dozen years or so, several research groups have tried various ways to use these microbes as bio-generators, but tapping this energy efficiently has proven challenging. Part of that challenge for the Stanford team is the cost of the oxide minerals necessary to make it happen. “We demonstrated the principle using silver oxide, but silver is too expensive for use at large scale,” says team member Yi Cui. “Though the search is underway for a more practical material, finding a substitute will take time.”

The Stanford engineers estimate that the microbial battery can extract about 30 percent of the potential energy locked up in wastewater. That is roughly the same efficiency at which the best commercially available solar cells convert sunlight into electricity.

Their study was published recently in the Proceedings of the National Academy of Sciences.