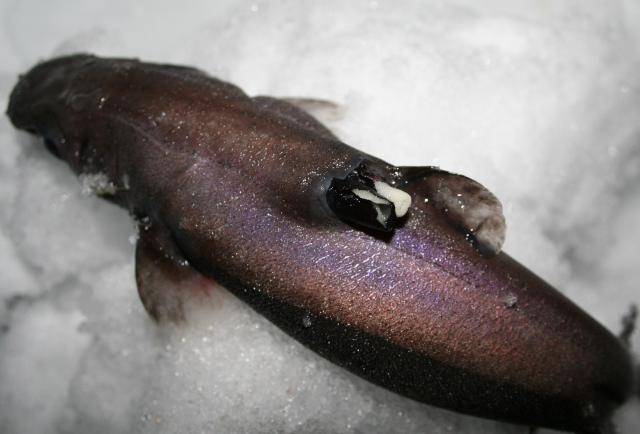 At Science Today we love parasites! So when we heard about Anelasma squalicola, a parasitic barnacle that not only attaches itself to lantern sharks, but sucks out nutrients from the shark’s flesh, impairing the shark’s reproductive organs, we had to find out more. Luckily for us (and you), we have a brilliant barnacle expert here at the Academy, senior research fellow Bob van Syoc.

Recently returned from an Academy expedition to the Philippines, van Syoc responded to a few questions about this castrating barnacle.

Tell us about Anelasma. What makes it different from other barnacles?

It has similarities in general body shape to the pedunculate, or stalked, barnacles. However, the stalk has evolved various modifications that serve to function as a feeding appendage rather than simply a site of attachment. The stalk of Anelasma is embedded in the host shark and absorbs nutrients from the host tissues. The thoracic limbs, cirri, have atrophied to the point where they can no longer function in filter-feeding, as they do in other stalked barnacles. In addition, Anelasma squalicola is found only as a parasite of relatively rare deep-water sharks. This indicates that Anelasma squalicola is a relict species, perhaps a sort of living fossil if you will.

Recently, Current Biology published a paper about Anelasma. What does the study say about the species’ evolution? Does it surprise you?

The authors conclude that Anelasma is most closely related to Capitulum mitella, an intertidal barnacle in the western Pacific that has a typical morphology for stalked barnacles. Anelasma and Capitulum (and the abundant northeastern Pacific shore barnacle, Pollicipes polymerus) evolved from a common filter-feeding ancestor. Somewhere in the lineage of Anelasma, parasitism of sharks evolved. Today, Anelasma squalicola is the only living species within that lineage that retains this parasitic lifestyle. From this we might conclude that parasitism in this lineage was not very successful, in evolutionary terms.

It does surprise me that Anelasma is most closely related to Capitulum and Pollicipes. I would have thought it closer to Lepas and other species that commonly attach to flotsam or drifting animals. One might imagine how an ancestral larval form attached to sharks rather than, say, a jelly or floating log. But, going from the intertidal zone to sharks? That’s a bit of a longer leap. However, it’s possible that the original leap was from shallow water rocks to shallow water sharks, with Anelasma surviving only on deep-water sharks as the only remaining species in an unsuccessful lineage. Relict marine species have found refuges in the deep-sea, or isolated areas.

How many barnacles are parasitic? Can you talk about how other parasitic barnacles operate? Is it similar to those in the study or much different?

The Rhizocephalans, mentioned in the paper, have a few hundred species. These are truly dedicated parasites that have nearly completely lost any external adult features, having evolved into a network of fibers extending throughout the host crab tissues. Only a reproductive sac on the crab abdomen gives external evidence of the parasite. This lineage is very far removed from Anelasma, a thoracican cirriped. However, there are similarities in the method of extracting nutrition from the hosts via fibrous “roots.”

In general, what makes barnacles so interesting to study?

Several things. They are common and abundant in all of the seas of the world, from tropics to poles, deep-sea to intertidal, estuaries to coral reefs. Their fossil record, thanks to a calcareous shell, is easily traced. Charles Darwin (who studied barnacles for decades, another reason they are interesting to study!) noted, “Cirripedes now abound so under every zone, all over the world, that the present period will hereafter apparently have as good a claim to be called the age of Cirripedes, as the Palaeozoic period has to be called the age of Trilobites.” In addition, as this article points out, many barnacles have evolved obligate relationships with other organisms—corals, sponges, turtles, sea snakes, sharks, worms, and crabs. On top of that, there is the evolution of various combinations of genders—hermaphrodites only, hermaphrodites with complemental males, females and dwarf males. They are sessile organisms that have retained internal fertilization rather than broadcast spawn. Hermaphrodites functioning as males can extend their penis several times their own body length, knock on the shell of a neighbor to check if they are a receptive functional female, and insert the extended penis into her shell to inseminate her egg mass.

What are you working on now?