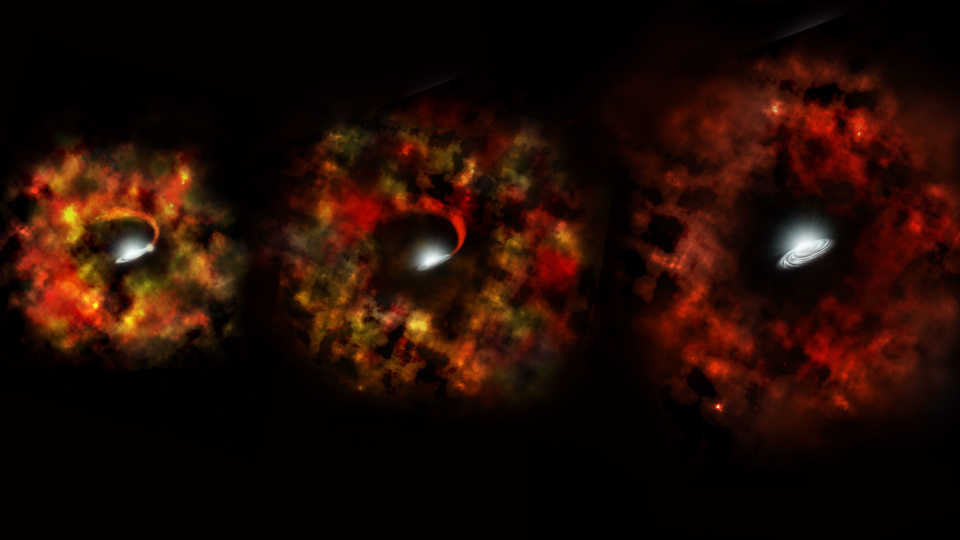 Normally, when we talk about the end of a massive star’s existence, we think of a huge explosion. It’s an accepted idea in astronomy that any star more than roughly ten times the mass of our sun will end its life with a supernova explosion. The star ends fusion in its core and isn’t able to hold up its mass any longer, and we see a huge bounce-back of material as the outer layers collapse onto the increasingly dense core. After the explosion, we expect to find a neutron star, or, if the star is massive enough, a black hole. But this idea is being called into question for very massive stars. For the first time, astronomers were able to observe as a star near the end of its life quickly winked out of sight, no explosion necessary!

Astronomers at The Ohio State University (OSU) were studying a galaxy about 22 million light-years away using the Large Binocular Telescope (LBT). This galaxy gained the nickname the “Fireworks Galaxy” due to the high rate of supernovae that we observe inside it, a perfect place to explore how massive stars end their lives. Back in 2009, a star about 25 times the mass of our sun, elegantly named N6946-BH1, began to slowly brighten in the distant galaxy. But, by 2015, the star apparently just… disappeared! Such an unusual occurrence warranted more investigation, so the team of astronomers utilized a number of different telescopes to try to understand what happened to the star. To make sure the star didn’t just become so dim that the LBT couldn’t spot it anymore, they pointed the Hubble Space Telescope towards that spot, but still saw nothing. They also used the Spitzer Space Telescope to examine the region for infrared emission, which could have shown that the star was still there but shrouded in a dark dust cloud. Again, no dice. Based on multiple observations and a careful process of elimination, the team determined that the star must have become a black hole.

This finding was certainly new, but also not entirely surprising for the team of astronomers. According to Christopher Kochanek, professor of astronomy at OSU, “If a star can fall short of a supernova and still make a black hole, that would help to explain why we don’t see supernovae from the most massive stars.” Why would this be the case for these very massive stars? More studies need to be done to understand the details, but co-author Krzystof Stanek explains that it wouldn’t necessarily make sense that a massive star could undergo a supernova, and still have enough mass left over to form a massive black hole, since these explosions involve releasing a lot of the star’s material out into space.

So how often do these massive stars go directly into their black hole state? This project is still in its infancy, and since this is the first time anyone has been able to observe such an event, the frequency is still pretty uncertain. But Scott Adams, a former OSU student who recently earned his doctorate studying this subject, has an initial estimate: “N6946-BH1 is the only likely failed supernova that we found in the first seven years of our survey. During this period, six normal supernovae have occurred within the galaxies we’ve been monitoring, suggesting that 10 to 30 percent of massive stars die as failed supernovae.”