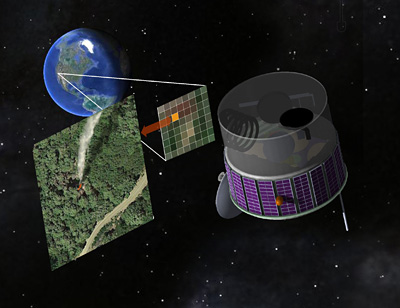 What if wildfires were detected early enough to stop them in their tracks? That’s what UC Berkeley researchers are proposing with a new fire-detecting satellite.

The team says the proposed satellite could view the western United States almost continuously, snapping pictures of the ground every few seconds in search of hot spots indicating newly-ignited wildfires. Firefighting resources could then be directed to these spots in hopes of preventing the fires from growing out of control and threatening lives and property.

The UC Berkeley scientists have designed such a satellite using state-of-the-art sensors, written analysis software to minimize false alarms, and even given it a name—the Fire Urgency Estimator in Geosynchronous Orbit (FUEGO). They’re hopeful it can be built for several hundred million dollars, either by government or private entities.

“With a satellite like this, we will have a good chance of seeing something from orbit before it becomes an Oakland fire,” says Carl Pennypacker, a research associate at UC Berkeley’s Space Sciences Laboratory and scientist at Lawrence Berkeley National Laboratory, referring to the devastating 1991 fire that destroyed more than 3,000 homes in Berkeley and Oakland. “It could pay for itself in one firefighting season.”

With global warming, wildfires are expected to become more frequent and more extensive, fire expert and UC Berkeley professor Scott Stephens says. The new satellite could help spot smaller fires earlier. “Even today, most fires are detected, in some way or another, by people,” he says. “Even the Rim Fire near Yosemite National Park this past summer was detected by someone who saw a smoke column.”

“The point is, satellites like Landsat and GOES provide great information after a fire starts; they can focus and monitor a fire by looking at smoke plumes, fire spread, hot spots at the edges, etc.,” says UC Berkeley remote sensing expert Maggi Kelly. “FUEGO is designed for early detection of smaller fires. Right now, we lose a lot of time because fires are already big by the time we see them.

“In concept, this [FUEGO] is a simple system: a telephoto camera, an infrared filter and a recording device," Kelly says. The infrared filter measures thermal radiation, or heat; the brighter the signal, the hotter the source. "We are just looking for something bright compared to the surroundings or changing over time. Then, we do these rapid calculations to determine if one image is different from the next.”

(Science Today featured Maggi Kelly’s work a few years ago in a video about her work tracking Sudden Oak Death.)