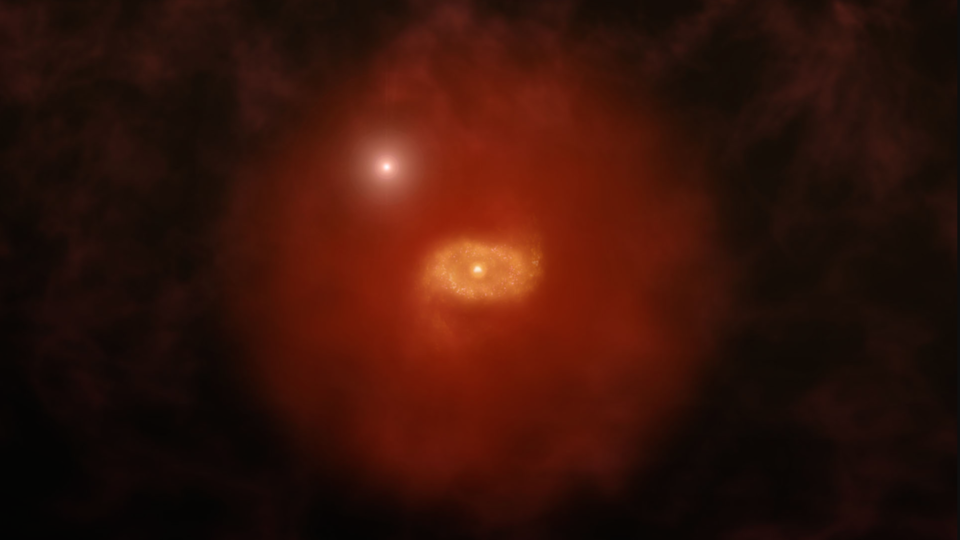 How do astronomers study distant galaxies? They use quasars. The bright light from one of these luminous galactic nuclei acts like a flashlight, highlighting objects in its path, from the source (billions of light years away) all the way to us. For decades, scientists have been using quasars to observe the characteristic way gas from a distant galaxy absorbs light from the quasar in the background. But the problem is, it doesn’t provide a complete picture. The technique actually prevents astronomers from seeing the light emitted by the galaxy, which is overwhelmed by the much brighter emission from the background quasar.

“Imagine a tiny firefly next to a high-power search light. That’s what astronomers are up against when it comes to observing these youthful versions of our home galaxy,” says Marcel Neeleman of UC Santa Cruz.

But Neeleman and his colleagues discovered a workaround. By harnessing the extreme sensitivity of the Atacama Large Millimeter/submillimeter Array (ALMA), the astronomers were finally able to observe the natural millimeter-wavelength “glow” emitted by ionized carbon in the dense and dusty star-forming regions of a pair of Milky Way-like galaxies seen when the Universe was only eight percent of its current age—a mere one billion years after the Big Bang.

The team looked for far-infrared emission signatures from the galaxies that they knew could be distinguished from the bright light of the quasars and discovered that these progenitors of today's giant spiral galaxies are surrounded by “super halos” of hydrogen gas that extend many tens of thousands of light years beyond their dusty, star-filled disks.

“This is the epoch when galaxies were really starting to take off in terms of star formation—sort of an adolescent growth spurt before reaching the peak of star formation about 2 billion years later,” according to J. Xavier Prochaska, one of Neeleman’s co-authors on a new paper on their findings.

“ALMA has solved a decades-old question on galaxy formation,” says Chris Carilli, another co-author on the paper. “We now know that at least some very early galaxies have halos that are much more extended that previously considered, which may represent the future material for galaxy growth.”

“We can now see the galaxies themselves, which gives us an amazing opportunity to learn about the earliest history of our own galaxy and others like it,” Neeleman explains.