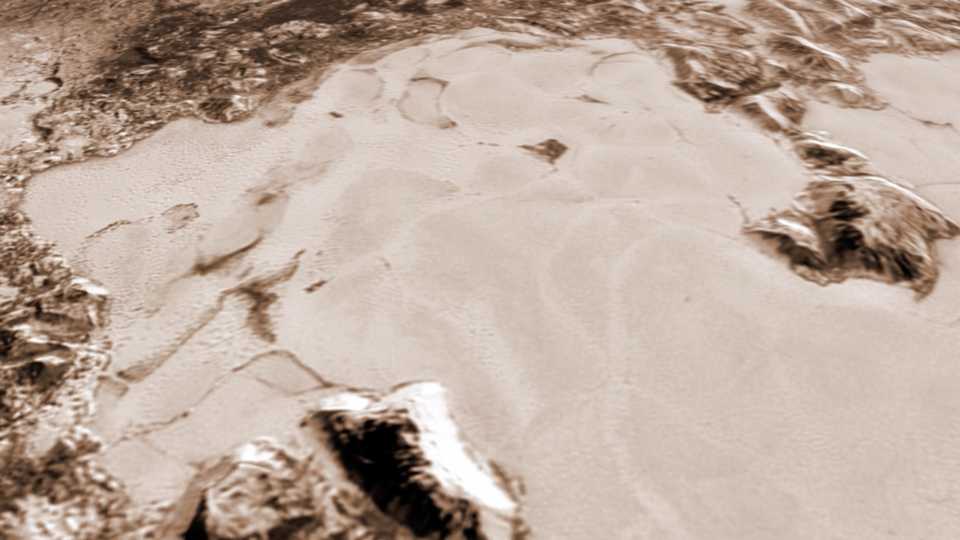 When you think of dunes, you might think of the wind-whipped sands of the Sahara—or if you’re of a more extraterrestrial bent, perhaps some of NASA’s stunning images of Mars. But evidence of dunes has been found on the planet Venus, Saturn’s moon Titan—and even Comet 67P!

An article published today in Science analyzes data from NASA’s New Horizons mission to propose the discovery of dunes on Pluto.

New Horizons zipped by Pluto in July 2015, making rapid-fire observations of the dwarf planet (and its moons), then spent more than 15 months uploading all its data to Earth! Planetary scientists are now scouring the data for new discoveries and insights into this remarkable world—the most distant object ever visited by human spacecraft. There’s a lot to look at.

Sputnik Planitia, half of Pluto’s famous heart-shaped region, is a vast plain of nitrogen ice, with something like the consistency of toothpaste, that shows evidence of convection cells that evidently remind NASA press release writes of “a cosmic lava lamp.” Like rippled icing on the convection cake, the proposed dunes appear on the surface of some of these cells.

They sure look like dunes, but looks can be deceiving…

Jeffrey Moore of the Bay Area’s NASA Ames Research Center, New Horizons Co-Investigator and one of the article’s co-authors, describes the challenge: “The interesting, repeating patterns we see covering this part of Sputnik Planitia certainly resemble dunes, but they might also be sublimation erosion patterns, or due to a combination of sand movement and sublimation erosion. Whatever they are, we can ‘just’ make them out in our best images.”

The shape and orientation of the patterns is consistent with dunes (and other explanations can be ruled out). But to make dunes on a planet or moon or comet or dwarf planet, you need some kind of particles (think of the Sahara’s sand) and a wind to distribute them over the surface. There’s no sand on Sputnik Planitia, and Pluto’s tenuous atmosphere seems an unlikely candidate for tossing anything around, but sorting through and modeling various possibilities, the authors of today’s paper suggest that “particles of methane ice in moderate winds” could form these patterns. Pretty spiffy!

But as Moore indicates, these features are at the limit of the resolution of New Horizons imagery. How do we answer these questions with greater certainty? Moore suggests going back to Pluto: “These features, and many others, cry out for a follow up mission that can see clearly what is now at the limits of perception on one of the most amazing and complex planets in our solar system.”

By the way, Moore will be speaking in Morrison Planetarium at the end of June, as part of our Benjamin Dean Astronomy Lecture Series. He’ll be talking about Mars, not Pluto, giving a guided tour of high-resolution 3D reconstructions of the Martian surface… Maybe we’ll even visit some dunes?