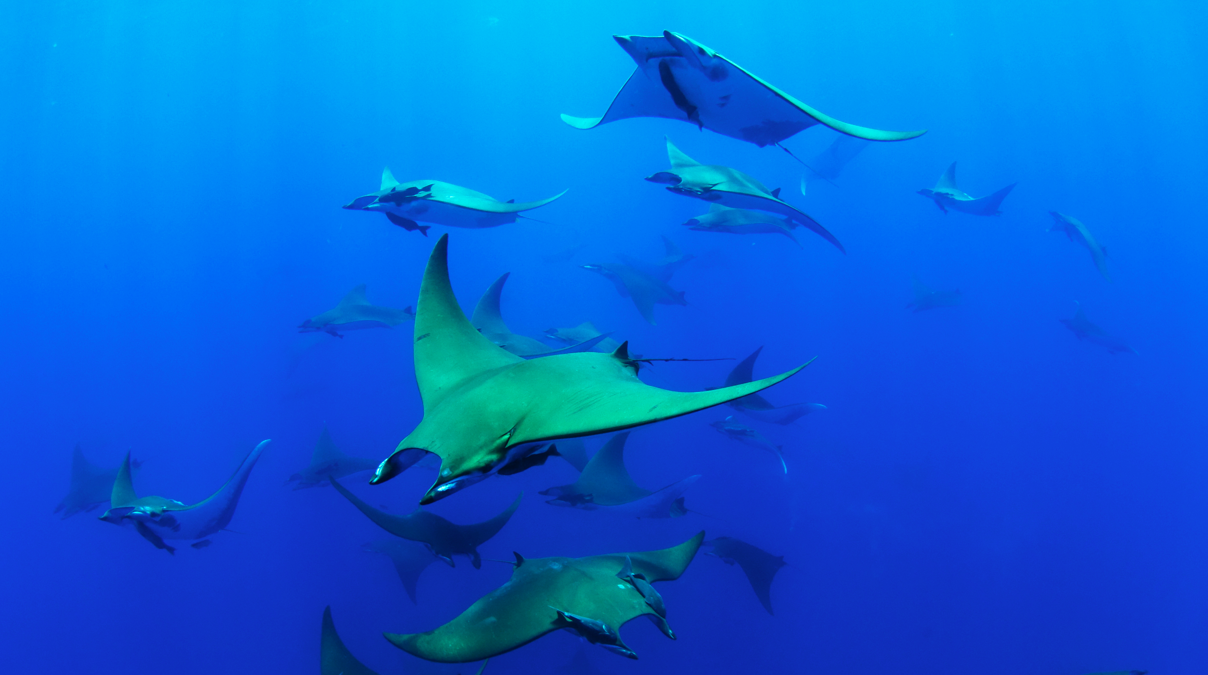 Cartilaginous rays are some of the largest, most charismatic and unusual fish in the ocean. Yet we know very little about many species. Their movement and feeding patterns tend to be a bit of a mystery.

As we reported here (with a follow-up story here), pop-up satellite tags, other tracking technology, and genetic testing are helping scientists—including the Academy’s Anna Sellas—track and understand populations of spotted eagle rays in the Gulf of Mexico. And as reported today in Nature Communcations, another team of scientists is using satellite tags to learn more about Chilean devil rays (Mobula tarapacana).

The team, led by Simon Thorrold of Woods Hole Oceanographic Institute, tagged and tracked fifteen devil rays in 2011 and 2012 off the coast of the Azores—Portuguese islands in the middle of the North Atlantic Ocean. They tracked many of the animals for up to nine months, learning much about the large predators.

The fish travel swiftly across great distances—up to 49 kilometers (30 miles) per day, and as far as 3,800 kilometers (2,300 miles) over several months time. This is faster than basking and whale sharks, but slower than white sharks.

Perhaps more impressive are the devil rays’ diving habits. Up to now known primarily as ocean surface dwellers, these rays have a specialized organ called the retia mirabilia that allows some fish to warm their brains through heat exchange. It has long been proposed that brain activity and visual acuity allowed by higher brain temperature convey significant selective advantages when foraging in cold, deep water.

Sure enough, data from the satellite tag revealed that the devil rays are deep divers. Measurements revealed frequent dives to depths of up to two kilometers—among the deepest dives recorded for marine animals—where the temperature can reach as low as 3°C. Most dive times were recorded as less than 90 minutes, although a few lasted as long as eleven hours. Deep dives took place most frequently during the day, and before and after deep-water expeditions, the rays tended to spend a significant amount of time near the surface during daytime, presumably to warm up.

Why bother making the expensive (energy-consuming) dives? Foraging in the deep scattering layers—areas at depth with high biomass, including squid and other tasty morsels—is likely the reason, say the scientists.

Perhaps this new knowledge can help protect the devil rays, recently listed as an endangered species. The scientists believe that an understanding of their behavior may become crucial to future conservation efforts.