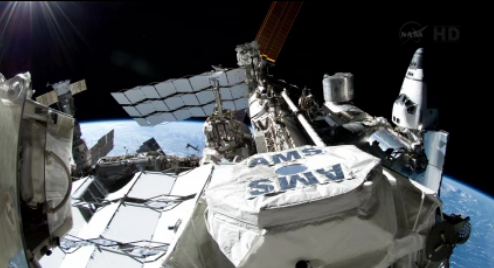 Several weeks ago, I wrote about a lively session at the AAAS Meeting about dark matter. At the meeting, Nobel laureate Samuel Ting hinted that he may have further evidence of the mysterious matter that makes up a quarter of the mass of our universe. He said the results would be published in a few weeks, and much to reporters dismay, left it at that.

Today, speaking from CERN, Ting finally announced the results. They will be published on Friday in the journal Physical Review Letters.

Ting spent several years (almost two decades!) convincing NASA and others to establish a detector in space to measure dark matter. Now, the Alpha Magnetic Spectrometer (AMS) experiment, installed on the International Space Station in 2011, studies cosmic rays before they have a chance to interact with the Earth’s atmosphere, and the secret to dark matter could lie in these cosmic rays.

Scientists believe that an excess of positrons in the cosmic ray flux could be the result of dark matter particles colliding and annihilating. One of the leading explanations for dark matter, a subset of particles collectively known as “weakly-interacting massive particles” (or “WIMPs”), would create positrons as a by-product of colliding with one another: individual collisions would happen rarely, but scattered throughout the Universe, they would result in a detectable bath of positrons of different energies. And AMS indeed detected an excess of these particles. While this has been measured in the past by other space-based observatories, the data from AMS represents the largest collection of positron particles recorded in space.

“As the most precise measurement of the cosmic ray positron flux to date, these results show clearly the power and capabilities of the AMS detector,” Ting remarked. “Over the coming months, AMS will be able to tell us conclusively whether these positrons are a signal for dark matter, or whether they have some other origin.”

However promising the results, they may not signal dark matter at all. The positrons could originate from pulsars distributed around the galactic plane. Now AMS will further refine the measurement’s precision, and gather and analyze more data. Ting believes there’s no question that in the next year or two, we will understand exactly what these results indicate. It could be dark matter. Stay tuned…