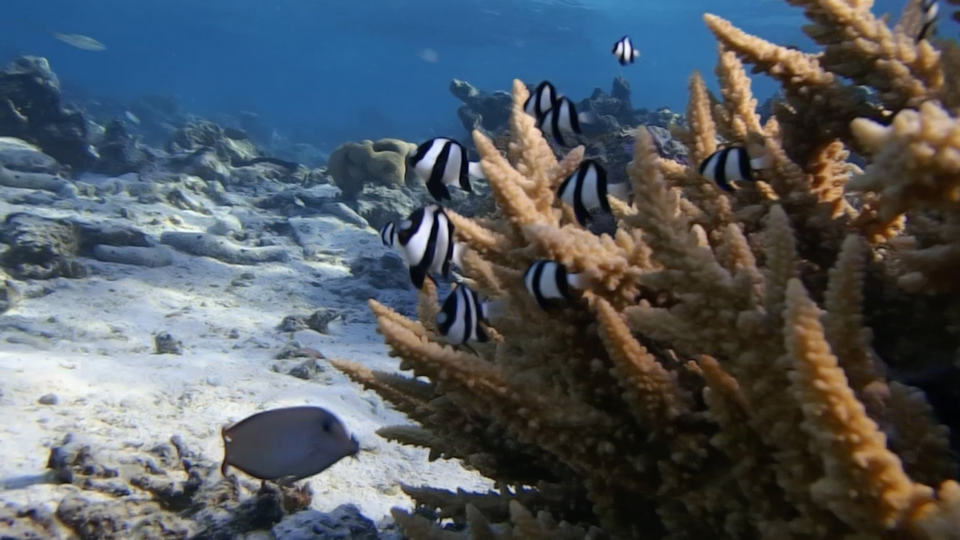 Corals versus climate change—it seems like an unfair fight. Corals are extremely sensitive animals with very specific requirements for surviving and thriving—including the right temperature conditions. However, a few corals already manage to adapt or recover from normal warming trends. How are they able to do this? And can lessons learned from these corals be applied to other corals around the world?

In the last month, the Academy hosted two visitors who study climate and coral reefs—Steve Palumbi of Stanford and Simon Donner of the University of British Columbia. Science Today had the opportunity to sit down with both of the scientists when they were here, so today we’ll focus on Palumbi’s studies; Tuesday, we examined Donner’s.

Palumbi studies corals all around the world. “I’m an evolutionary biologist; I’m a marine biologist; I’m a conservation biologist,” he says. “And to be honest, you can’t separate all of those, because the life of the sea, the diversity got there by evolutionary processes. And there are all these amazing ways they live their lives in nooks and crannies of the ocean, and that’s all evolution. But there are a lot of them under stress because of what we do to the ocean, and so if you’re used to going to the same places for 10 or 20 years and seeing them decline—a lot of my friends have turned into conservation biologists.”

Why corals? “Coral reefs are very severely affected by water that’s too warm. It’s a little bit odd, because you think of them living only in warm water, but if the water heats up two, four degrees Fahrenheit above normal, it can kill them.”

But Palumbi and his colleagues have found corals that survive in very warm water in “back reef lagoons that heat up to almost human body temperature, that are way too warm for corals to live in, but they do live there. So the question is, how do they do that? And if they can do that, can other corals do that? And if other corals can do that, is there something that that’s telling us about their future as the oceans warm around us?”

Palumbi and his team study warm lagoons in American Samoa in the South Pacific. During low tides, these lagoons heat up to 95 degrees Fahrenheit, temperatures well above those that would cause coral bleaching. But these corals do not expel their algae, so they do not undergo bleaching. Why not?

Through next generation sequencing techniques, Palumbi and his team determined that the corals can acclimate and adapt to different temperatures. Corals, like people, have adaptive genes that can be turned on or off when external conditions change. The corals Palumbi’s group studied adjusted themselves by switching on or off certain genes, depending on the local temperature.

These findings, published last spring in Science, make clear that some corals can stave off the effects of ocean warming through a double-decker combination of adaptation and physiological adjustment to local conditions.

“We have a project that’s going on now that takes—those corals from those really warm pools where they’re doing quite well, thank you very much—and we’re trying to move them to an adjacent place that is less warm,” he explains. “And the idea is, could we transplant a heat-tolerant reef to someplace else and still have it be heat-tolerant? And then if we can do that, maybe that will help create some parts of reefs in the future that will be heat-tolerant?”

While Palumbi’s research may help some coral reefs survive future warming events, he cautions that it’s not a magic bullet. “None of this will be solved if we don’t solve the emissions problem,” he says.