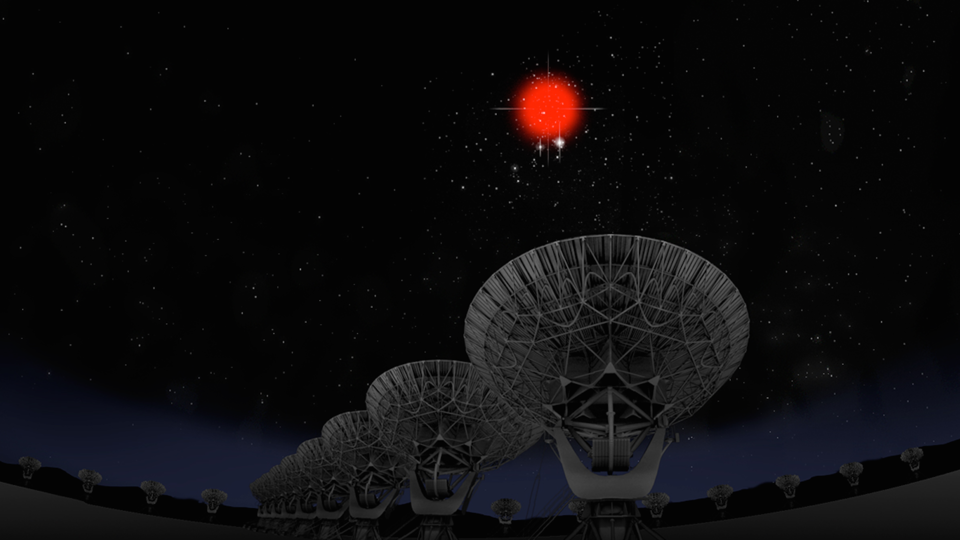 Astronomers love a good mystery, possibly more than most, and they make careers out of solving them. Which means they’re always looking for new challenges! The current front runners are called Fast Radio Bursts—or simply “FRBs,” since astronomers love acronyms as much as they love mysteries. On first day of the American Astronomical Society (AAS) meeting this week, astronomers announced the discovery of a critical clue in resolving the FRB enigma. In a paper published yesterday in the journal Nature, they associated an FRB with a dwarf galaxy billions of light years away, which begins to narrow down the possible solutions to this cosmic conundrum.

(From the perspective of Rick Fienberg, AAS Press Secretary, this qualifies as “the biggest astrophysical news since the detection of gravitational waves.”)

As their name suggests, FRBs shine brightly but briefly in radio wavelengths (a form of light less energetic than our eyes can detect). As we noted in our 2013 Science Today article about FRBs, “astronomers have a lot more research to do before we can solve the radio burst puzzle,” but a lot has changed since then.

Yesterday’s announcements centered on FRB 121102—its name, by the way, comes from the date of its first detection, so as you might surmise, it was first spotted on November 2, 2012 (although, given that naming convention, I’m not sure what happens when they discover two FRBs in one day). Most FRBs appear to be one-off events, but FRB 121102 bursts repeatedly, following no discernible pattern and with variations between events. In fact, it’s the only repeating FRB, which makes it ripe for further study.

It also made the astronomers involved in yesterday’s announcement more confident that they could narrow down the FRB’s location.

Detecting an FRB presents several challenges; pinpointing its location is even more challenging. First and foremost, your telescope needs to be sensitive enough to detect one—and yeah, I know I said they were “bright,” but honestly, that’s only if you’re close to one, and since FRBs lie tremendously far away from us, they actually appear quite faint from Earth. Second, you need to be looking in the right place at the right time, which means your telescope is likely looking at a broad swath of the sky (or possibly staring at a small patch of the sky for a very long time). If your telescope accommodates both those requirements, it likely can’t pin down the FRB’s location with much precision—and if an FRB is only spotted once, then its location is likely even more poorly known.

Indeed, prior to this work, even with multiple observed bursts, the location of FRB 121102 covered a fairly small but nonetheless dauntingly large section of the sky. To go back to the mystery metaphor, it’s a bit like finding a victim in a room large enough to contain dozens of suspects.

To narrow the search, an international group of astronomers undertook an elaborate observation plan using the Very Large Array (VLA) in New Mexico. With multiple radio antennae acting as a single, giant telescope, the VLA can zero in on a source with remarkable accuracy, but because FRBs are, well, fast, taking place over a few milliseconds, the VLA had to observe FRB 121102 rapidly and repeatedly (a little bit like using your iPhone in “burst” mode, ironically enough). All these observations resulted in an enormous amount of data to sift through. As Casey Law of UC Berkeley described it, borrowing a tried and true metaphor, it was like knowing what needle you’re looking for, but then “finding that needle in a terabyte haystack.” Ultimately, they found FRB 121102 doing its thing nine times in the VLA data.

These nine observations then allowed astronomers at the Gemini Observatory to search for a source in visible light. When they looked at the VLA coordinates, they found a dwarf galaxy, 1,000 times smaller than our own Milky Way Galaxy, billions of light years away. FRB 121102 lies not at the dead center of this galaxy, but slightly offset.

Astronomers have proposed many ideas (or as we like to call them, models) for what causes FRBs, and with few constraints, the models proliferated. As Shami Chatterjee of Cornell University put it, “We have more models than detected bursts, which is a fun place to be!” But after yesterday’s announcement, many of the proposed models can be eliminated.

In the opinion of the astronomers at yesterday’s press conference, we have two leading contenders for what causes FRBs…

They could result from light emitted by what astronomers call an active galactic nucleus. That seems a little odd, since FRB 121102 doesn’t reside in the visible center of its host galaxy, but dwarf galaxies can be funny that way, with mass concentrated in a different region from the brightest part of the galaxy.

Or the preferred explanation from the assembled scientists—perhaps FRB 121102 is a magnetar! (If FRBs are the latest fad in cosmic mysteries, then magnetars are a favorite suspect in many astronomical crimes, from soft gamma repeaters to anomalous X-ray pulsars.) Magnetars are neutron stars (basically the collapsed cores of giant stars) with intense magnetic fields; those magnetic fields can wreak havoc on their surroundings, which makes them capable of the extraordinary range of bizarre phenomena.

Other solutions get even more exotic! And perhaps not all FRBs are created equal—whatever powers the repeating bursts of FRB 121102 might not be the same mechanism that’s causing other FRBs. But as we discover more of these strange objects, we can uncover more clues to the latest cosmic mystery.

Category: Milky Way and Beyond