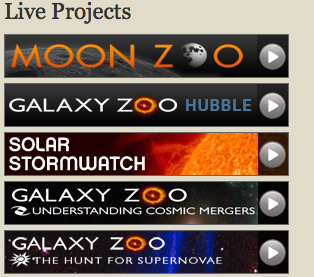 Would you like to explore the Moon, spot explosions on the Sun, hunt for supernovae, or even search the skies for signals from intelligent aliens?  Thanks to the Internet, you can – and you don’t even have to have a degree in astrophysics!

Though it has benefited greatly from the power of online connectivity, citizen science is not a new concept, it’s not all astronomical in nature, and it doesn’t necessarily require a computer.

The oldest citizen science project is the Christmas Bird Count, a census of birds of the Western Hemisphere that was started by the Audubon Society in 1900.  One of the newest is the campaign to monitor the eclipsing binary star system Epsilon Aurigae, where every 27 years one component of the star system blocks the other from view for about 2 years.

In 2007, the Citizen Science Alliance launched an online project called Galaxy Zoo, inviting guests to log in and classify distant galaxies by their shapes—spiral, barred spiral, edge-on, or irregular.  An instant hit, Galaxy Zoo became enormously popular and opened the door for additional projects that included observations of merging galaxies, searches for solar flares and supernovae, and, most recently, classification of features on the Moon, all under the broad project name “Zooniverse”.

Zooniverse follows in the footsteps of one of the best-known online popular science projects, SETI@home, based at the University of California’s Space Sciences Lab and which was launched in 1999.  A more passive approach, SETI@home uses the idle-time on subscribers’ computers to activate a screensaver that doubles as a signal analyzer. The analyzer searches downloaded packages of signal data detected by radio telescopes for patterns that might indicate intelligent activity.

Citizen scientists have much to offer to real science. It was almost a year ago that amateur astronomer Anthony Wesley discovered a new spot on Jupiter that had scientists pointing their telescopes in a new direction. Today, Hubble announced the cause of the spot: an asteroid.