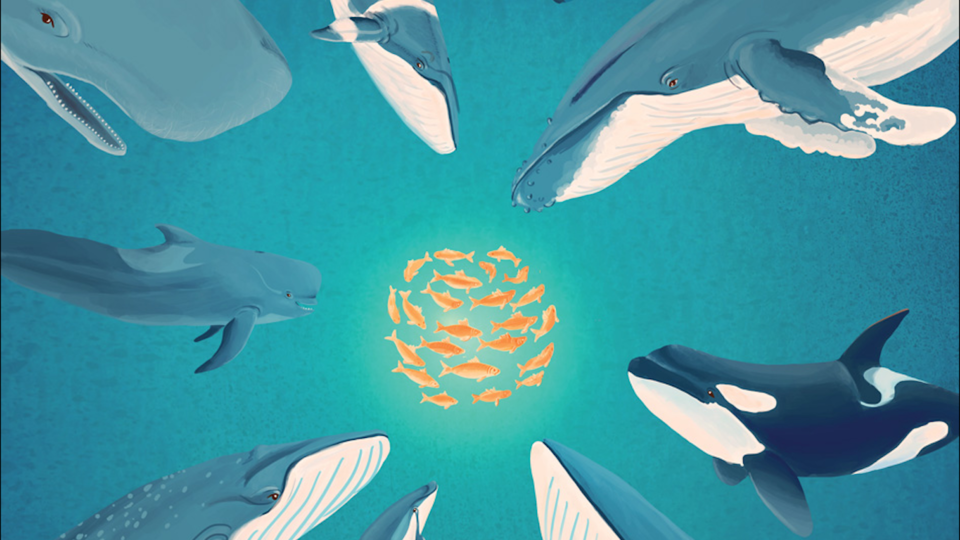 It turns out humans aren’t the only species that chat over dinner. Scientists are finding that many marine animals do the same. And one team of researchers is using these mealtime conversations to understand the foraging habits of these creatures—who shows up, where they meet, and how species overlap.

In a large area in the northern Atlantic ocean, billions of herring, forming a large group called a shoal, come to spawn in the late summer and early fall, attracting several different marine mammals species, including baleen whales and toothed whales. Using a technique known as passive ocean acoustic waveguide remote sensing, engineer Purnima Ratilal and her colleagues mapped the vocalizations and spatial distributions of various whales—including blue, fin, humpback, sei, minke, sperm, pilot, and dolphins large and small. The team was able to instantaneously detect, localize, and classify each species’ vocalizations and they discovered that the different species divide the shoal into overlapping foraging sectors. The species-specific sectors are maintained for at least two weeks of the herring spawning period.

In general, calls from each chatty cetacean species increased dramatically at nighttime, when herring tended to form extremely dense shoals. During the day, these whale calls dissipated, as herring scattered throughout the seafloor. Ratilal’s team also found that of the baleen whales, the fins are found to be the most blathering group with the highest measured vocalization rates of roughly 14,000 calls each per day, followed by humpbacks with roughly 2,000 calls per day. The researchers point out in their new study that these marine mammals “vocalize for a variety of purposes that include songs associated with mating in mysticete [baleen] whales, social sounds associated with inter- and intragroup interactions, signals for long range or night-time acoustic communication, calls for coordinated movement during feeding or migration, and echolocation for prey-finding in odontocetes [toothed whales] that may possibly extend to certain mysticete whale species.” (So not just the gossip of the day, as many humans are limited to.)

Another recent study determined that small, deepsea bony fish also likely communicate when feeding. The sound could be utilized like a dinner bell, according to UC San Diego’s Simone Baumann-Pickering, a signal for the fish to start migrating up to the surface or back down to the darker depths of the ocean to follow the food source.

Maybe these conversational fish and marine mammals will serve as fodder for your dining conversation tonight?

(To listen in on the conversations of fin whales, humpbacks, toothed whales, or bony fish, click on each name.)