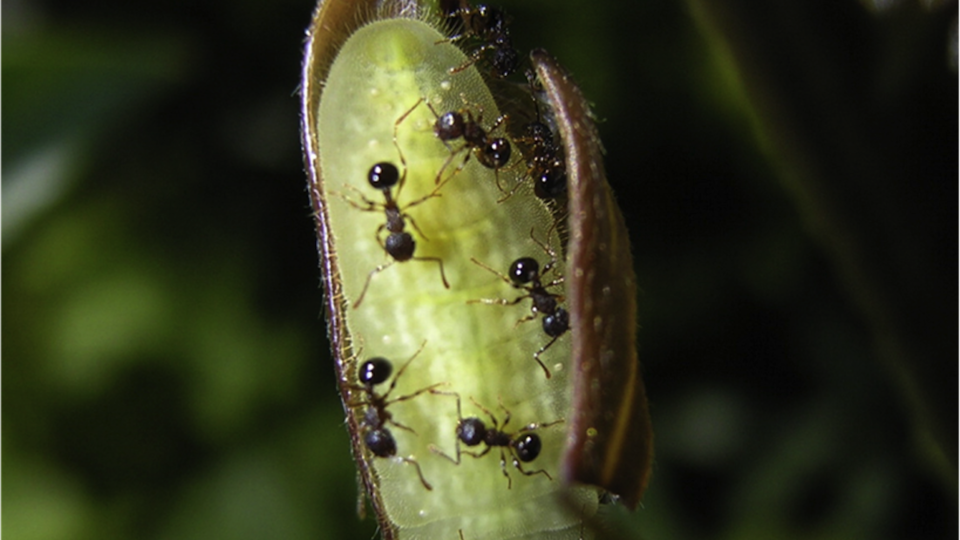 Experience teaches us that there’s no such thing as a free lunch. Whether it’s in money, time, health, or something else, there’s always some form of payment. Scientists recently discovered that the adage holds true for Pristomyrmex punctatus ants and the nutrition they receive from Narathura japonica caterpillars.

While their supposed mutualistic behavior has been understood for years—the ants receive nectar secretions from the caterpillars in exchange for guarding the caterpillars from predators—a new study in Current Biology determines that it may not be as mutual as originally thought. In fact, the caterpillars are likely drugging the ants with the secretion, manipulating the ants’ behavior for protection.

A team of Japanese and American scientists, suspecting potential parasitic behavior on the caterpillars’ part, fed some ants the caterpillar nectar secretions and withheld it from other ants over a period of time and then compared the behaviors and brain activity between the two groups. The researchers discovered that the secretion slowed the ants down but also increased their reaction to the equivalent of a caterpillar distress signal—protruded tentacle organs—making the ants more aggressive in the presence of a potential predator. The ingestion of nectar must have changed the physical behavior of the ants, apparently to the caterpillars’ benefit.

In addition, the team looked at the affected ant brains, using a technology called “liquid chromatography-electrospray ionization-tandem mass spectrometry (LC-ESI-MS/MS).” A big description for something that measures tiny brains! The researchers found that dopamine levels were significantly lower in the drugged ants than in the ants that received no nectar. The decreased dopamine is likely behind the observed physical changes in the ants, the team reports.

Given that these ants have other food sources and are not soliciting the caterpillars for the secretion (or guard duty, for that matter), the scientists believe that this relationship is more parasitic than mutualistic, and that the caterpillars are getting the better end of the deal. They end up receiving a lot more proportionally than the manipulative nectar lunch they provide the ants.