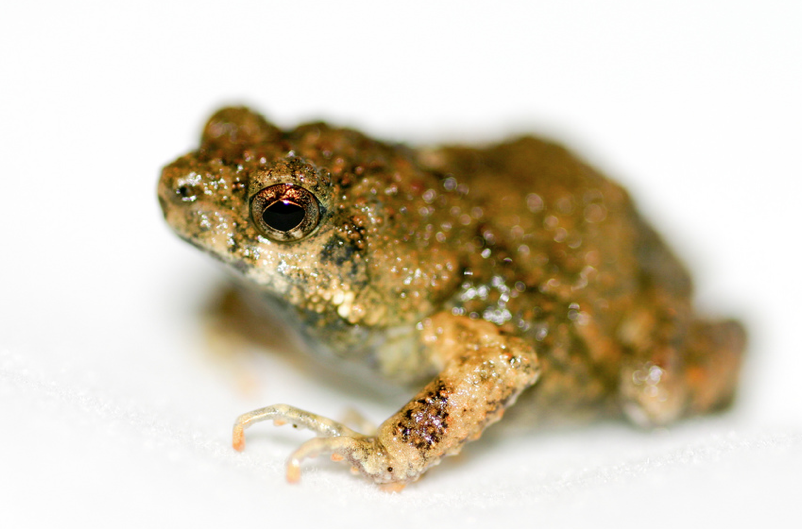 Imagine calling out to your love, serenading her, beckoning her to join you in the cool pond water in which you rest. Your calls are sonorous patterns of glugs, mews, and whines—just the sort of thing the ladies like to hear. And then, quick as a flash—WHAP!­—you are snatched up by a wild-eyed, hungry bat, and your once-hopeful evening, and life, are over.

That’s what happens to the poor, romantic male túngara frogs of Central and South America. As they call out to potential mates from shallow ponds on the forest floor, they inadvertently make themselves targets for frog-eating bats. And their vocalizations aren’t the only things giving them away. When the frogs croon, their vocal sacs expand and contract, creating ripples in the water around them. New research shows that those ripples, in concert with the frogs’ calls, are helping bats locate their prey.

In a study published last week in the journal Science, researchers from the University of Texas at Austin, the Smithsonian Tropical Research Institute (STRI), Leiden University and Salisbury University found evidence that bats use echolocation—a natural form of sonar—to detect these watery ripples and zero in on a frog.

“When a frog detects the shadow of a bat overhead, his first defense is to stop calling immediately. Unfortunately for the frog, the water ripples created by his call do not also stop immediately. The ripples continue to emanate out for several seconds, creating a watery bull’s-eye on the frog. Bats use the ripples, thereby beating the anti-predator strategy,” says the study’s lead author, Wouter Halfwerk of the University of Texas at Austin.

“In each trial, both stimuli were presented simultaneously and both were immediately halted when the bat flew from its perch, thereby mimicking the natural antipredator response of the frogs. Although sound immediately ceased at this point, ripple propagation continued until the ripples reached the end of the experimental pool two to three seconds later,” the report says.

The bats chose to attack the frogs giving off multisensory signals 36.5% more often than the ones sending out sound alone. The researchers deduced the bats were using echolocation because the experiments were conducted with no visible light, so the bat had no visual cues.

So the same behavior túngara frogs use to attract a mate is endangering their lives by projecting their locations to predators—quite a natural selection quandary.

Scientists are finding an interesting evolutionary give-and-take with these animals. The frogs have learned to hush up when they get wind of a nearby predator. And the bats have learned how to find the frogs even when the music stops by using their echolocation and water ripples. But the frogs may have another trick up their sleeves: The researchers also found that bats chose to attack frogs in clean water much more often than frogs in ponds cluttered with leaf litter.  The debris in the pond breaks up the ripples, jamming the bat’s echolocation abilities. Maybe the túngara frogs’ next evolutionary move will be to start keeping a messy house, for survival’s sake.