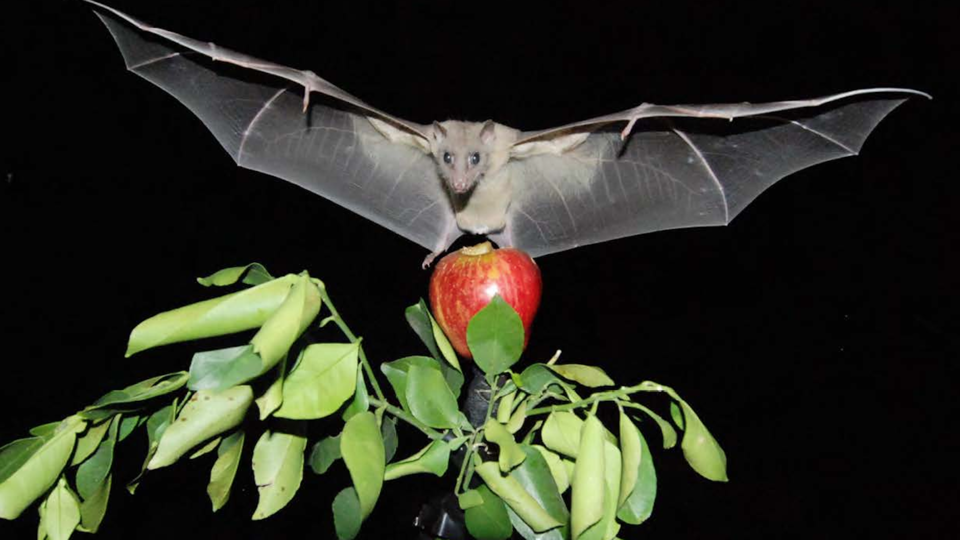 On airplanes, keeping track of which direction you’re headed is understandably important. Gyroscopes do this by maintaining their orientation no matter which way your DC-10 is pointed.

But how do bats do it? Night after night, these tiny avian mammals take flight in the darkness and avoid crashing into most obstacles. In elementary school, we learned about echolocation—a bat’s ability to use ultrasound as radar, bouncing inaudible squeaks off obstacles and prey. Last week, a group in Israel revealed another piece of the puzzle, showing that bat brains can always keep track of where their tiny heads are pointed.

Arseny Finkelstein and his team attached what can only be described as a Christmas-tree like device to the heads of fruit bats in order to track neural activity as they flew around a room or crawled on a table. Finkelstein knew that rats could keep track of where they were walking as certain neurons fired in their brain. Are bats just as capable? Could their brains keep track of more information, since they have more at stake as they fly through the air? This group was the first to explore the questions for an animal moving in 3D space.

The data showed that bats do an exceptional job of knowing where they are, which was no surprise to the researchers. What came as a surprise was the versatility of the bats’ spatial sense: not only can they tell where they’re pointed, they even know where they’re heading when flipped upside down—something rats can’t do. This may have to do with behavior and evolution, since rats don’t travel upside down much, but one can certainly imagine that a bat might find itself upside down on occasion, either on purpose or by accident.

Bats might not be the only ones with such good senses. The scientists speculate that these cells “might be found also in non-flying mammals that move in complex 3D environments… such as squirrels, cats, dolphins, and primates.” Keep your neurons oriented for the next studies on mammalian GPS.