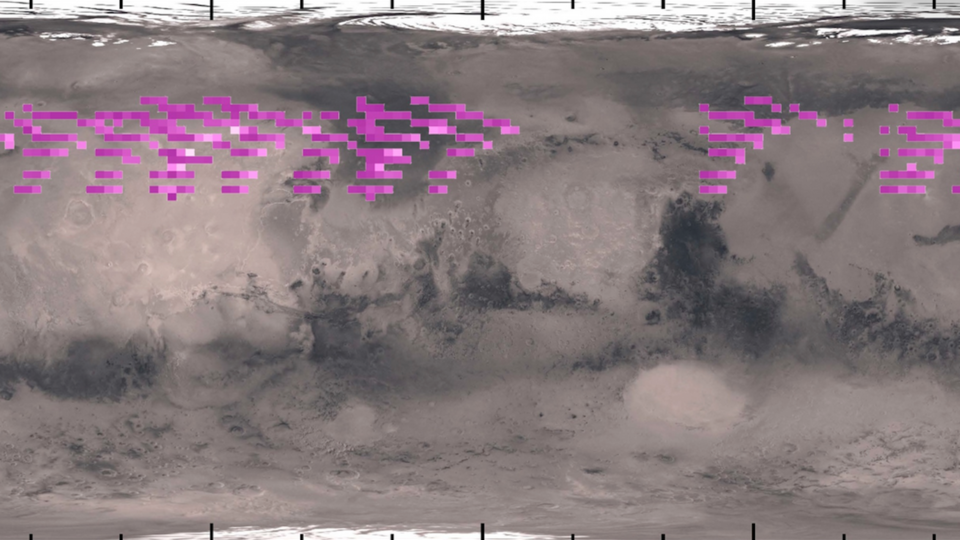 Aurorae and Dust in Martian Atmosphere

Between aurorae and mysterious dust clouds, there is a lot going on in the martian atmosphere, as revealed this week when NASA presented findings from MAVEN’s Imaging Ultraviolet Spectrograph (IUVS) at the 46th Lunar and Planetary Science Conference in Texas.

On Earth, auroral displays occur when charged solar particles slam into molecules in our atmosphere, generating a distinctive glow. The lights generally occur at high latitudes—50 to 200 miles (80 to 320 kilometers) above the surface—because Earth’s magnetic field funnels the solar particles toward the planet’s poles.

“What’s especially surprising about the aurora we saw is how deep in the atmosphere it occurs—much deeper than at Earth or elsewhere on Mars,” said Arnaud Stiepen, IUVS team member at the University of Colorado. “The electrons producing it must be really energetic.”

Another noticeable difference concerns the composition of the martian atmosphere compared to Earth’s—without abundant amounts of oxygen and nitrogen in its thin atmosphere the martian aurora would not have appeared very impressive to human eyes. MAVEN made the observations in UV spectrum, meaning to us, it would have appeared a dim blue glow at best, if not out of the visible spectrum entirely.

Dubbed the “Christmas Lights,” the display was observed across five days leading up to Christmas this past year. While an interesting find, they are not the first aurorae noted on the red planet. In 2004, ESA’s Mars Express captured the first detections of martian aurorae.

NASA also announced an unexplained high-altitude dust cloud that has persisted ever since MAVEN began its science operations in November 2014.

MAVEN’s Langmuir Probe and Waves instrument has been tracking a wispy cloud that reaches from about 93 miles (150 kilometers) above the martian surface up to about 190 miles (300 kilometers). While the origin of the cloud is still mystery, possible explanations include dust from the martian surface or from Mars’s moons Phobos and Deimos, cometary debris, or even dust carried in the solar wind.

“If the dust originates from the atmosphere, this suggests we are missing some fundamental process in the martian atmosphere,” said Laila Andersson, of the University of Colorado's Laboratory for Atmospherics and Space Physics in Boulder.

NASA officials also made it clear that neither the aurora nor the dust cloud pose a danger to MAVEN or any other Mars-orbiting spacecraft. (Whew!) –Elise Ricard

A Ring System Around Chiron?

As we learn more about planets in our universe, rings become less rare. In our solar system, alone, rings encircle Saturn, Jupiter, Uranus, Neptune, and the centaur (a minor planet), Chariklo. Recently MIT scientists may have added another centaur to that list, Chiron.

In November 2011, the group observed Chiron pass in front of a bright star, briefly blocking its light. The researchers analyzed the star’s brightness and the momentary shadow created by Chiron, identifying optical features that suggest the centaur may possess a circulating disk of debris. The team believes the features may signify a ring system, a circular shell of gas and dust, or symmetric jets of material shooting out from the centaur’s surface.

“It’s interesting, because Chiron is a centaur—part of that middle section of the Solar System, between Jupiter and Pluto, where we originally weren’t thinking things would be active—but it’s turning out things are quite active," says MIT’s Amanda Bosh, co-author of the study published last month in the journal Icarus.

“Until Chariklo’s rings were found, it was commonly believed that these smaller bodies don’t have ring systems,” Bosh continues. “If Chiron has a ring system, it will show it’s more common than previously thought.” –Molly Michelson

A “New Star” in Sagittarius

An Australian astronomer has discovered a “new star” that can be seen with the unaided eye in the constellation Sagittarius the Archer. Properly referred to as a “nova,” this object is not truly a new star, as the traditional Latin name implies. It’s actually an old, massive star—called a white dwarf—experiencing a temporary increase in brightness.

A typical white dwarf may be about the diameter of Earth, yet contain the mass of a star like the Sun, compressed to a super-dense state. What causes the startling change in brightness is the fact that this particular white dwarf is part of a binary system, orbited closely by a less-massive companion star. As the white dwarf’s gravity siphons off—or accretes—hydrogen gas from the atmosphere of its companion, the material piles up on the white dwarf’s surface and starts fusing, triggering a runaway chain reaction that releases a tremendous amount of energy—and up to 100,000 times as much light as the Sun. This process may repeat itself several times, each nova burst ejecting only a miniscule amount of mass—only about 1/10,000 solar mass.

Coined by the astronomer Tycho Brahe in 1572, the term “nova” should not be confused with “supernova,” which describes is the cataclysmic explosion of an entire star. However, until the 1930s, when astronomers finally distinguished between the processes involved, the two terms were considered synonymous.

Astronomers have been carefully observing and measuring the magnitude of the nova, named Nova Sagittarii 2015 No. 2 (and still referred to in some places by its provisional name, PNV J18365700-2855420). Since its discovery, its brightness has increased slightly, making it just visible to the unaided eye and easily within the grasp of good binoculars. To see it, go out before the start of morning twilight (around 5:00 a.m.) and look low in the southeast for the “teapot” asterism in Sagittarius the Archer, with the handle to the left and the spout on the right, as if pouring onto the tail of bright, distinctive Scorpius the Scorpion. It will look like a faint star positioned about halfway across the bottom of the teapot’s lid. –Bing Quock