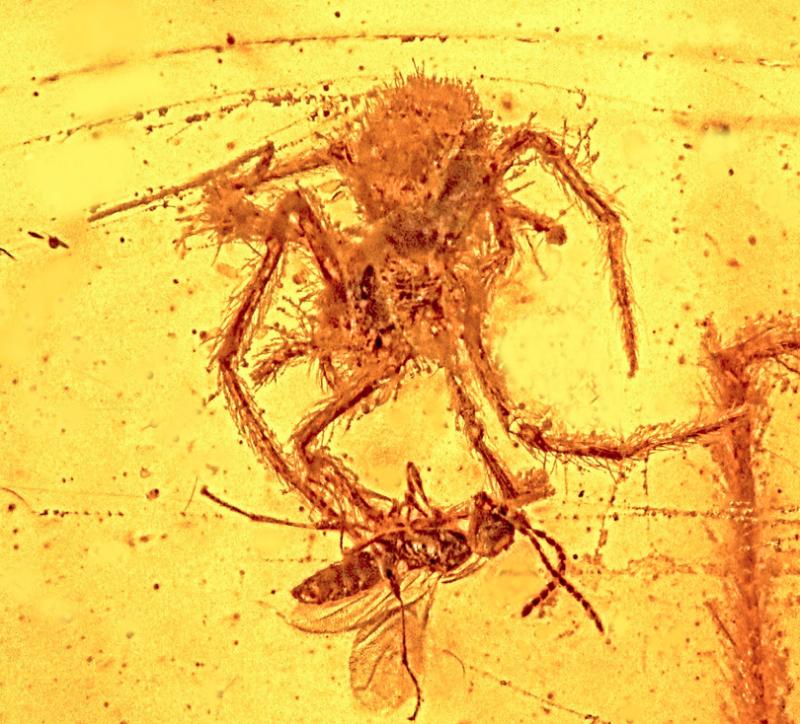 “Will you walk into my parlor?” said the Spider to the… Wasp? Mary Howitt wrote the familiar poem almost two hundred years ago, but researchers have discovered evidence of this interaction much, much earlier—100 million years ago!

The tree resin that forms amber acts like an amazing time machine. It freezes items—plants, insects and other life forms—in near perfection, later turning into a semi-precious stone for scientists to study millions of years later.

The latest amber find, from Myanmar, is the only fossil ever discovered of a spider attacking prey caught in its web. The research is published this week in Historical Biology.

“This juvenile spider was going to make a meal out of a tiny parasitic wasp, but never quite got to it,” says lead author George Poinar, Jr. of Oregon State University. “This was the wasp’s worst nightmare, and it never ended. The wasp was watching the spider just as it was about to be attacked, when tree resin flowed over and captured both of them.”

Both the spider and wasp species are currently extinct, but provide clues to earlier life. This type of wasp, Poinar says, belongs to a group that is known today to parasitize spiders and insect eggs. In that context, the attack by the spider, an orb-weaver, might be considered payback.

Somewhat surprisingly, the piece of amber also contains the body of a male spider in the same web. This provides the oldest evidence of social behavior in spiders, which still exists in some species but rarely. Most spiders have solitary, often cannibalistic lives, and males will not hesitate to attack immature species in the same web.

Perhaps Howitt said it best in her poem (changed a bit here):

And take a lesson from this tale, of the Spider and the Wasp!