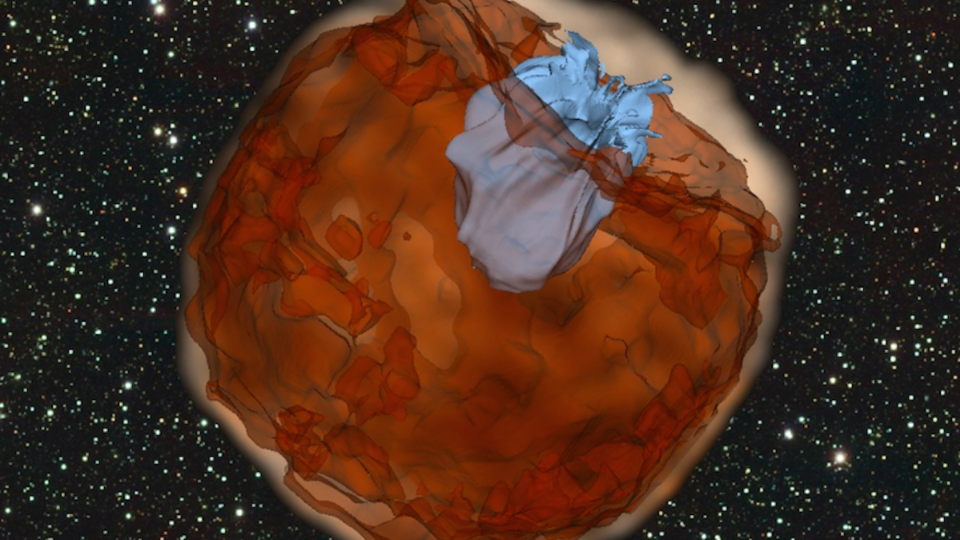 What causes Type Ia supernovae? Astronomers understand that when a white dwarf star explodes, it becomes one of these supernovae, and can outshine an entire galaxy. In fact, the brightness of Type Ia supernovae have allowed scientists to judge distances within our universe by how dim they appear relative to how bright they actually are. It is like knowing that from one mile away a light bulb looks 100 times dimmer than the same light bulb another located only one-tenth of a mile away. This consistency in brightness is what made these stellar objects instrumental in measuring the accelerating expansion of the Universe in the 1990s.

But there are two competing origin theories for this kind of supernova, both starting with the same general scenario: the white dwarf that eventually explodes is one of a pair of stars orbiting around a common center of mass. But is the second star another white dwarf, with the explosion occurring when the two similar objects merge,or is the second star a Sun-like star or red giant? In the latter model, the white dwarf’s powerful gravity pulls, or accretes, material from the larger star. This process, in turn, increases the temperature and pressure in the center of the white dwarf until a runaway nuclear reaction begins, ending in a dramatic explosion.

The challenge is catching the supernova event in the act since the involved stars are very dim before the explosions. Enter the intermediate Palomar Transient Factory (iPTF), a robotic observing system mounted to the Samuel Oschin Telescope in southern California. iPTF looks for transients—objects, including Type Ia supernovae, whose brightness changes over timescales that range from hours to days. On May 3, 2014, iPTF captured a possible supernova, later confirmed by both space- and ground-based telescopes.

NASA’s Swift satellite measured a pulse of UV radiation, which is consistent with a formation scenario in which the material ejected from a supernova explosion slams into a companion star, generating a shock wave that ignites the surrounding material, confirming the second theory—the companion to the white dwarf is a larger star. But scientists are quick to point out that it doesn’t rule out the other theory. Sterl Phinney of Caltech says, “The news is that it seems that both sets of theoretical models are right, and there are two very different kinds of Type Ia supernovae.” The research is published this week in Nature. –Molly Michelson

Last week, astronomers published in Science the first discovered quadruple quasar system, in one of the most massive structures yet found in the distant Universe.

These incredibly close quasars were found within cloud of cool, dense hydrogen gas a million light years across. Officially called Lyman-α nebula, it is also appropriately nicknamed the “Jackpot” nebula.

Quasars are believed to be powered by material accreting into supermassive black holes in the centers of some of the most distant, and therefore oldest, galaxies. They blast out enormous amounts of radiation, becoming powerful emitters and allowing us to see them brightly from billions of light years away. Finding four so close together, however, challenges some of what was understood about them.

“I think that our thinking needs to be revised,” says Hennawi. “We have theories about what causes a supermassive black hole at the center of a galaxy to turn on as a quasar, and typically something like a collision between two galaxies or an abundance of fuel for the black holes to swallow is the factor that turns on the quasar phase. These theories, however, would not predict the existence of this quartet.”

According to the team, the findings could have larger implications on our understanding of the Universe itself, forcing cosmologists to rethink quasar evolution, and the formation of massive structures. –Elise Ricard