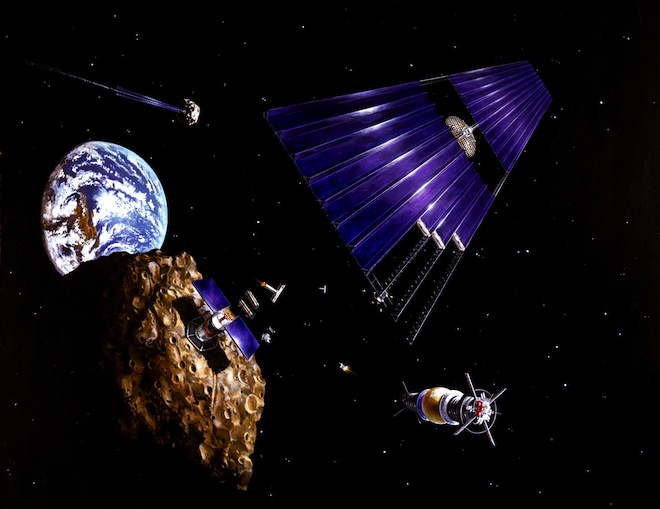 Mining asteroids for precious resources sounds like something straight out of a science fiction novel. But the first steps toward such grand missions are already underway—and not by organizations you might think of first.

Since exploration became a reality with the launch of Sputnik in 1957, governments have acted as the primary driving force (and funding source) for such spacy endeavors. But that’s beginning to change. A recent announcement by Deep Space Industries declared their intentions to compete with Planetary Resources and successfully mine asteroids in the next decade.

Planetary Resources’ announcement last April was met with some skepticism by the public. However, the concept no longer sounds so lofty. Billionaires and corporations quickly came forward to invest in the project and provide more significant funding than a government-sponsored project. And along with the money came talent: specialists brought on include former astronauts, asteroid specialists, and an operational director of Mars lander missions, even James Cameron.

Why the interest in asteroids?  They’re a hot topic in the scientific community. NASA’s Dawn mission is exploring two of the largest asteroids up close. And President Obama has indicated asteroids should be our next target for manned spaceflight instead of the Moon or even Mars. Additionally, the privately-funded non-profit B612 Foundation is preparing to launch the Sentinel observatory, designed to map out Near Earth Objects and the inner Solar System in the next couple years.

While they are intriguing objects in our Solar System, asteroids are also potentially hazardous—especially if one happens to be on a collision course with Earth. Just ask the dinosaurs—we would much prefer to find them before they find us.

Asteroids aren’t ordinary rocks! They contain metals such as iron, nickel, platinum, gold, manganese, molybdenum, tungsten, and others, all of which exist in Earth’s crust because they were brought by asteroids during our planet’s early years. Many also harbor ice. We can potentially harvest these resources to supplement materials on Earth or to utilize in future space endeavors.

In fact, one of the key aspects of space mining is that the resources probably won’t come back to Earth. Rather, they would remain in low Earth orbit and be used for space-based projects like refueling aging satellites and in-space manufacturing. Considering that it costs an estimated $10,000 per pound of material to put something into put space, having the resources already there would save considerable financial and physical strain. Extracting the resources provides challenges, too, however: for example, platinum-rich chondritic or iron body contains only around one ounce of platinum per ton.

Government-funded missions blazed the earliest trails in space exploration, but more and more private industrialists are imagining the next frontier. It looks like the next wave of exploration and discovery will arise from the private sector.

Elise Ricard holds a master's degree in museum education and is a presenter at the Morrison Planetarium.