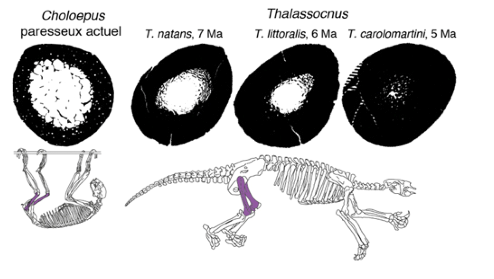 Two weeks ago, we wrote here of an ancient whale graveyard in Chile that also contained fossils of aquatic sloths. At the time, we made a mental note to learn more about these ancient cousins of one of the most charismatic creatures on Earth today.

Researchers in France must have read our minds, because this week they published a study in the Proceedings of the Royal Society B about aquatic sloths. Yes!

The study examines Peruivan fossils dating from eight-to-four million years ago. The French team looked at all five species of the aquatic sloth genus Thalassocnus, examining their bones using CT scans, trying to determine when and how the arboreal animals became aquatic, as Wired puts it,

reversing the evolutionary trend that saw our distant ancestors emerge from the sea and colonize the land.

In 2007, Brian Switek, the great writer about fossils, suggested the likely reason for the shift:

the sloths seemed to live on a coast backed by desert, deserts providing poor opportunities for browsing or obtaining food. The coast provided much more food in terms of sea grass, kelp, or other plants, and so the sloths were adapted to become more and more efficient at getting their food from the sea.

The trick for that efficiency, according to the French team’s CT scans, might have been depth. They found the fossilized bones were much denser than present-day sloth bones. This makes sense because heavier bones make aquatic life easier (think of divers’ weight belts). The team compares this bone density to that of present day marine mammals like manatees and dugongs. Like those large sea creatures, the aquatic sloths grazed on seaweed, and this deeper-diving ability gave the sloths more options.

The study explains that this adaptation from terrestrial to marine life occurred gradually, over a period of four million years. So what caused their extinction? Perhaps colder ocean temperatures were to blame, but more research is needed.