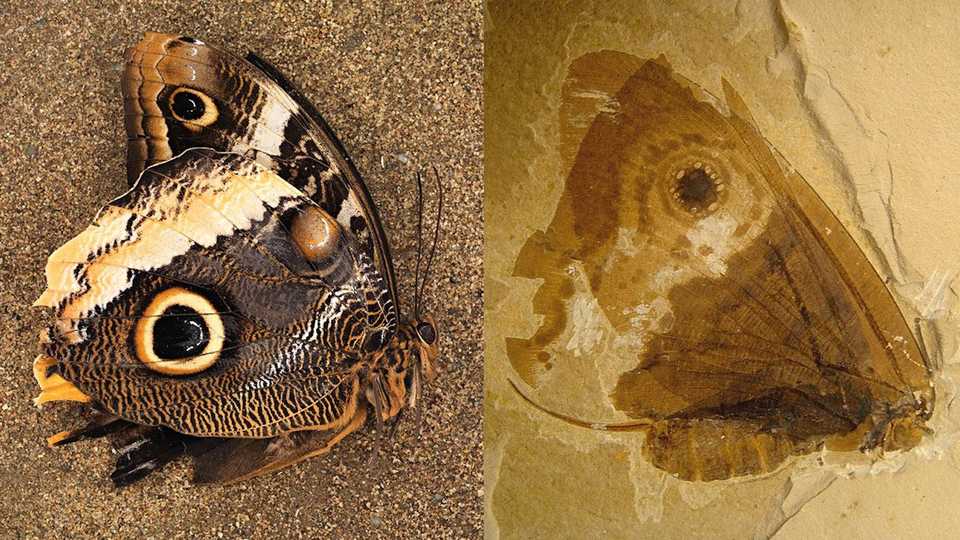 Fossils teach us a lot about ancient creatures, but often the smaller animals have more damaged fossils, which was true of kalligrammatids until recently. Scientists discovered well-preserved fossils from ancient lake deposits in northeastern China and eastern Kazakhstan, and upon further study, the similarities between the early insects and modern butterflies are uncanny. According to their study, published last week in Proceedings of the Royal Society: B, the researchers describe how the kalligrammatids “evolved wing eyespots that possibly contained melanin, and wing scales, elongate tubular proboscides, similar feeding styles, and seed–plant associations [think pollination], similar to butterflies.”

The team used modern photography, microscopy, and spectrometry to examine the fossils and found unique patterns on the wings, arising over 200 million years ago, which are nearly identical to markings on the modern owl butterfly. (In the image above, the owl butterfly is on the left, and the fossilized kalligrammatid on the right.) To this day, owl butterflies use these circular marks as a defense mechanism against predators, which mistake the spots as the eyes of a larger, more threatening animal.

The researchers also observed the fossilized remains of food and pollen trapped in the mouthparts of the insects, concluding that the kalligrammatid fed upon an ancient, now-extinct plant called bennettitales, using a long tongue to probe nectar deep inside the plant. Flowering plants, or angiosperms, did not yet exist, but the relationship was similar to that of the modern- day butterfly and flower. The insects also possessed hairy legs that allowed for carrying pollen from the male flower-like reproductive organs of one plant to the flower-like female reproductive organs of another.

The similar insects, separated by millions of years, are an example of convergent evolution, co-author David Dilcher of Indiana University explains, which occurs when two distantly related animals develop similar characteristics independently. Evolution is a great innovator, he continues, but at the same time: “if it worked once, why not try it again.” Or, as Ed Yong reports on National Geographic: it’s “the process two groups turn up to life’s party accidentally wearing the same outfits.”

Nothing wrong with the outfit, so why not?