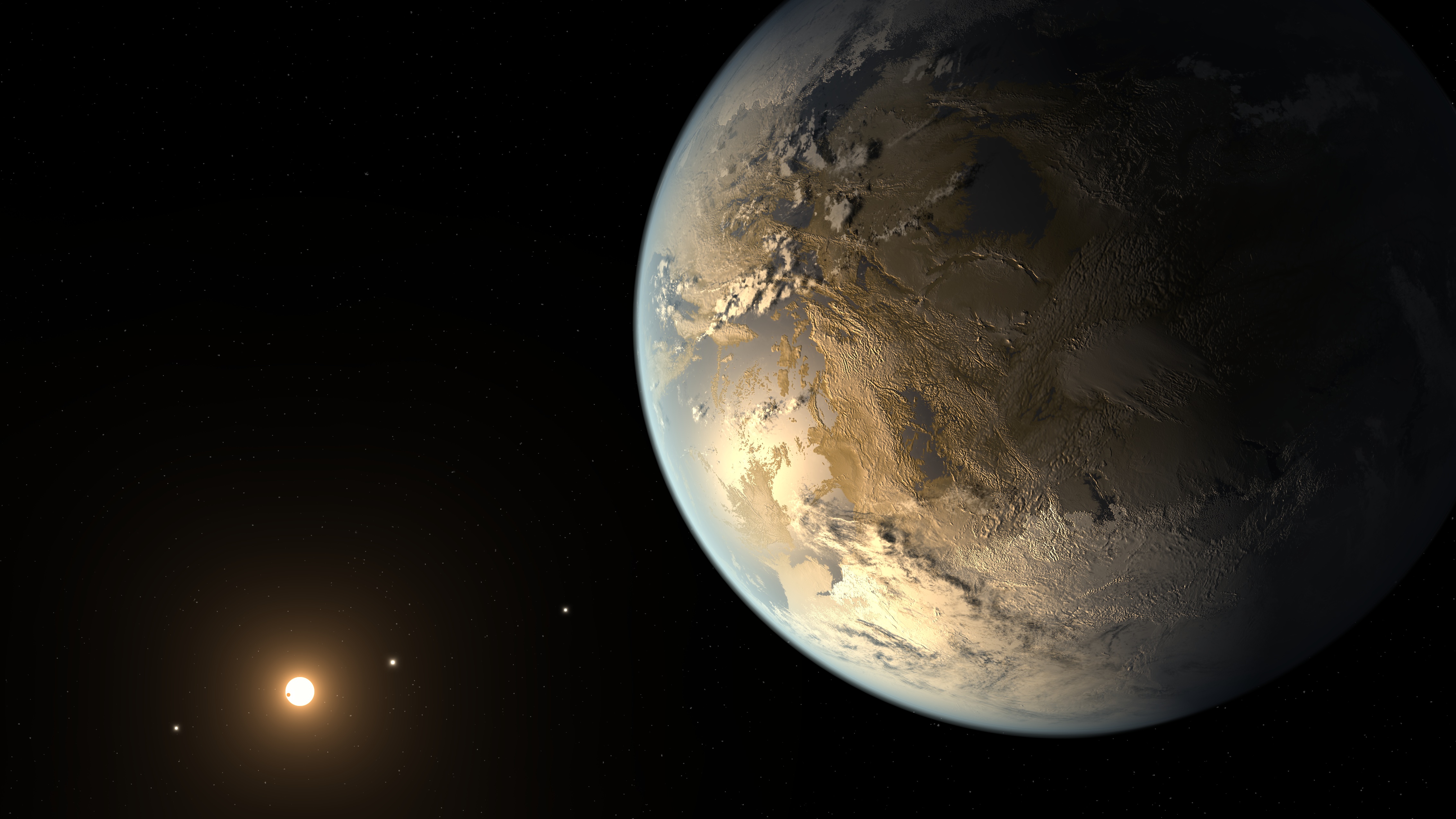 It seems like it was only a matter of time… NASA designed its Kepler Mission to find planets the size of Earth, and it has, but today, a team of researchers has announced the first such Earth-sized planet known to revolve around its parent star in the so-called “habitable zone” (or “Goldilocks zone”), where temperatures allow liquid water to exist on the surface of such a world. We’ve found many other worlds in their stars’ habitable zones, but mostly so-called “Super-Earths,” far more massive than Earth: some scientists think Super-Earths could support Earth-like environments, but opinion is divided, to say the least.

“We know of just one planet where life exists—Earth. When we search for life outside our solar system we focus on finding planets with characteristics that mimic that of Earth,” said Elisa Quintana, research scientist at the Bay Area’s own SETI Institute and lead author of the paper published today in the journal Science. “Finding a habitable zone planet comparable to Earth in size is a major step forward.”

The planet in question? Kepler-186f, which suffers from the same unpoetic naming scheme as other exoplanet discoveries: it’s the fifth-discovered planet around the star Kepler-186, a small red star (about half the size and mass of the Sun) known as an M dwarf. We know the planet is about the same physical size as Earth, but we don’t know its mass.

Kepler-186f lies some 500 light years away—a bit too far from the Solar System to be Superman’s home world, but in other respects, the fictional planet could provide a reasonable starting point for thinking about what such a world would look like. Kepler-186f lies at the outer edge of the habitable zone, so it receives only about one-third the energy from its star that we receive from the Sun. Probably a bit chillier than San Francisco, even. And who knows? The planet could even look like the ice-covered Krypton featured in the 1978 Superman movie. Sci-fi speculation aside, many questions remain to be answered…

“Being in the habitable zone does not mean we know this planet is habitable. The temperature on the planet is strongly dependent on what kind of atmosphere the planet has,” said co-author Thomas Barclay of the Bay Area Environmental Research Institute, headquartered at NASA’s Ames Research Center. “Kepler-186f can be thought of as an Earth-cousin rather than an Earth-twin. It has many properties that resemble Earth.”

The next step: finding a similar planet around a star more like the Sun!

M dwarfs outnumber Sun-like stars by a significant amount (for every star like the Sun, we expect to find about a dozen M dwarfs), so for that reason and a host of others, it’s not surprising that we found a habitable zone exoplanet around one of these smaller, more plentiful stars. But we don’t know if conditions around M dwarfs are as favorable to the development of complex life (for more details, check out this interview with astronomer Todd Henry of Georgia State University). So it would be comforting to find an Earth-sized world in the habitable zone around a Sun-like star.

It seems likely that the Kepler Mission’s data will help us accomplish that task, but the next significant discoveries may need newer technologies. Once we find these tantalizing worlds, we need more refined tools to determine their composition and the make-up of their atmospheres… To find out how Earth-like these Earth-sized planets really are! And that work may need to wait for the Transiting Exoplanet Survey Satellite and the James Webb Space Telescope to come online.

In the meantime, Kepler-186f marks a major milestone in the search for life in the Universe. A planet the size of Earth in the habitable zone of a small red star… A true kindred world, perhaps with the potential for life.

Ryan Wyatt is the director of Morrison Planetarium and Science Visualization at the California Academy of Sciences.