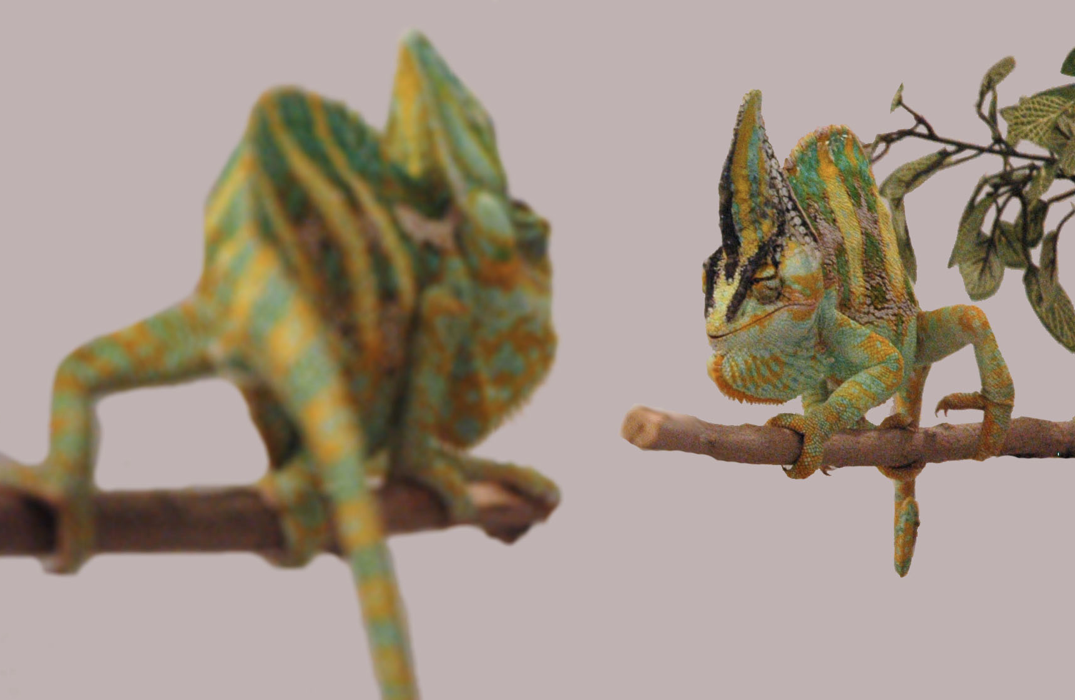 Among the 160 species of chameleons in the world, you might not meet one as tough as the veiled chameleon (Chameleon calyptratus), native to Yemen and Saudi Arabia. These lizards are mostly solitary, and when one male meets another, they’re incredibly aggressive—curling their tails, hissing, and quickly changing to brighter and brighter colors.

Together in their lab, Russell Ligon and Kevin McGraw of Arizona State University, decided to dig into this color change a bit more. They used a high-speed camera, snapping images of the aggressive reptiles every four seconds. They adjusted their cameras using information on chameleon physiology and photoreceptors, enabling the scientists to measure the colors actually seen by the lizards.

With the images from these chameleon cams, the duo studied the distance, maximum brightness, and speed of color change of 28 different patches across the chameleons’ bodies.

Chameleons typically have resting colors that range from brown to green, with hints of yellow, but each chameleon has unique markings. Before and during a fighting match, the lizards show bright yellows, oranges, greens, and turquoises.

“We found that the stripes, which are most apparent when chameleons display their bodies laterally to their opponents, predict the likelihood that a chameleon will follow up with an actual approach,” says Ligon. He likens it to a billboard.

“The winner of a fight is often decided before they actually make physical contact,” Ligon says. “The winner is the one that causes its opponent to retreat. While sometimes they do engage in physical combat, these contests are very short—five to fifteen seconds. More often than not, their color displays end the contest before they even get started.”

(Video of one of these matches can be found here.)

So perhaps for some chameleons, it’s better not to fit in…?

The research was published last week in Biology Letters.