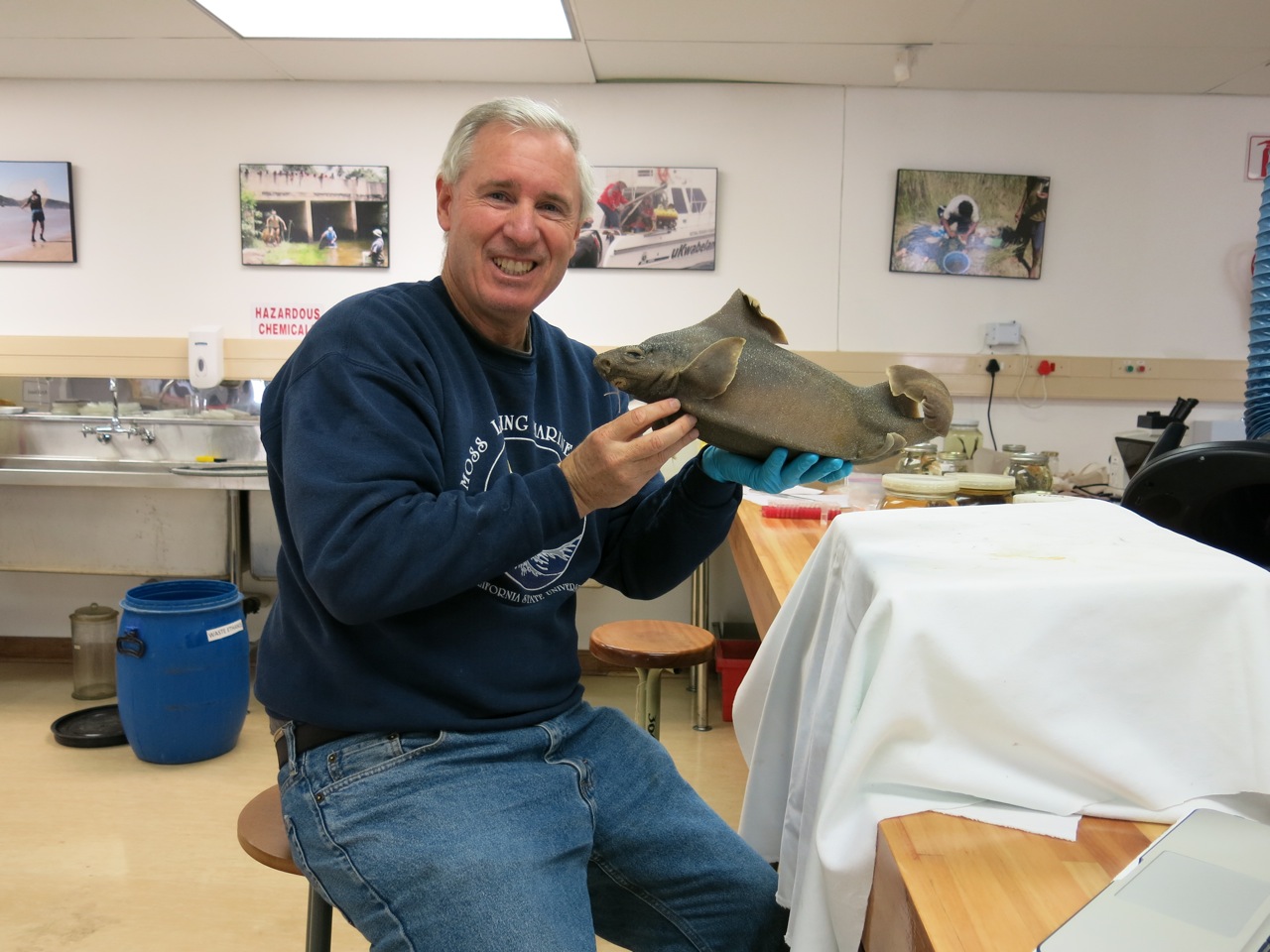 We’re ending our shark celebration week with one of the most tireless shark researchers out there: Dave Ebert, Academy Research Associate and Director of the Pacific Shark Research Center. Ebert travels the globe studying and communicating about these amazing fish.

We caught him yesterday, just back from Taiwan, trying to enjoy a few days off (Sorry, Dave!). Ebert was in Taiwan filming with the BBC for a show about a day in the life of a shark researcher. (If you remember our article about Ebert for last year’s shark celebration, the BBC also followed him to New Zealand for the same program. It will air next year.)

Apparently, to study fish in Taiwan, you just need to go to fish markets. John McCosker did the same thing earlier this year. Ebert covered the markets and also shops that sold shark fins, mostly from Hong Kong. He has been going to Taiwan since the late 1980s and confirmed what McCosker mentioned—Taiwan has pretty good fisheries management. “They are so dependent on the fisheries,” Ebert says.

I asked him if shark fin consumption is becoming more controversial there, as it is here in the U.S. and elsewhere, and given Taiwan’s leadership role in sustainability in the region. He says there are “changing attitudes, but there’s no shortages of the fins in shops.”

But, Ebert says, “unlike some areas, fish are landed whole in Taiwan. The fins are cut off, but the meat is also used. And the stomach and intestines are used as food. Even the head is eaten. Every part of the fish is used.” And it’s always been that way. “Nothing is going to waste.”

One thing Ebert has noticed more recently in the fish markets of Taiwan is that he is seeing fish from deeper and deeper waters. Where they used to fish in depths around 100-200 meters, now their catch originates from around 800-900 meters. And Taiwan is no exception.

Around the world, fishermen are going deeper and deeper to gather their sustenance. To that point, Ebert and his student Paul Clerkin are holding workshops about identifying sharks in the deep sea in the Indian Ocean. (We covered a bit of this Tuesday when we wrote about Clerkin’s shark adventures.) The idea of these United Nations FAO (Food and Agriculture Organization) workshops is to reach out to governmental agencies, ministries and academics in the region to train fishermen about what they’re catching, chondrichthyes-wise.

This spring, Ebert gave the keynote at the Sharks International Conference, held every four years. The meeting was held in South Africa, which gave Ebert the opportunity to do bit of research while he was there. While there, a colleague came off a boat with three new shark species that Ebert will continue to work on and describe at his lab in Moss Landing. When he finds time, that is.

In March, Ebert was a little closer to home in Seattle as part of the International Union for the Conservation of Nature (IUCN) regional Shark Specialist Group, looking at sharks in the Eastern Pacific, from the Bering Sea to California.

And when he’s not traveling, Ebert is publishing. Here are a few selections, academic and otherwise, to peruse—Taiwan chondrichthyes, the FAO Catalogues on the Deep-sea Sharks, Rays, and Chimaeras of the Indian Ocean, and a pocket field guide to Sharks of the World (just published!).

And you can catch Ebert this fall here at Nightlife on October 9, with Paul Clerkin, for Sharktober. In the meantime, I hope he enjoys a few days off.
0