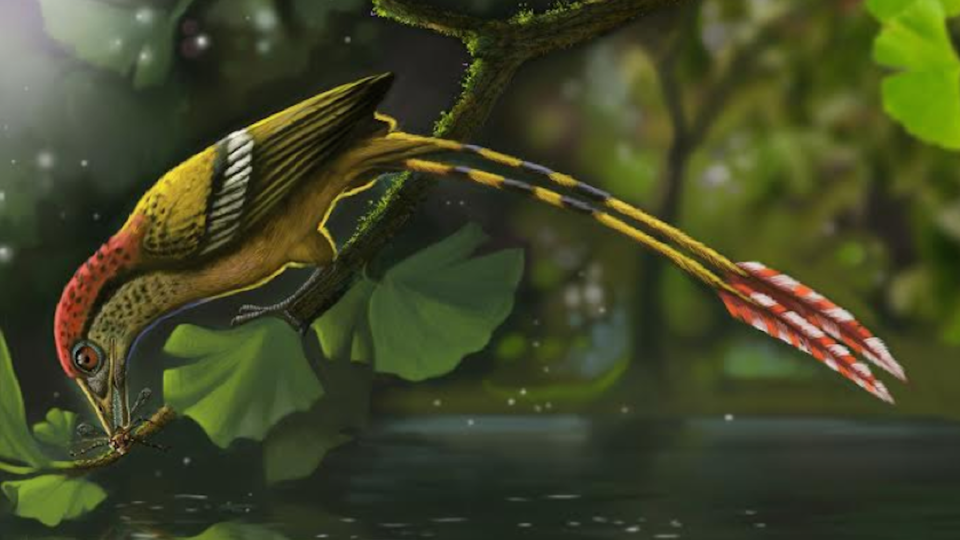 As we know, sometimes the largest treasures come in the smallest packages. And that’s certainly true with a new fossilized bird found in Brazil.

The size of a hummingbird and dating to the Early Cretaceous of Gondwana—145 to 100 million years ago—this fossil represents the most complete specimen from the period, and provides an unparalleled view of what appears to be a flashy evolutionary dead end.

The prize features of the specimen are its tail feathers. Long and ribbon-like, they are in excellent, three-dimensional condition, not seen in any other fossil from the time period. “The preservation and the ability to see these feathers well is very much the contribution of this paper,” the Academy’s bird expert Jack Dumbacher says about the finding, published today in Nature Communications. “Several other ancient birds from this era had long feathers, but none that were as well preserved or that offered such a clear view of the morphology.”

These ribbon-like feathers are “unlike any modern feathers,” Dumbacher explains. “The ribbon is really like a broad, thin feather shaft with no vane (or the feathery bits on the side of the feathers). These appear not to be precursors, especially since these are primarily seen in the enantiornithines, which have left no living descendants. They appear to be a dead end, but a common enough feature in these ancient birds that people are really curious what they are like and how they worked.”

So how did the birds use them? “It looks like there were some color pigments near the base of the feather, suggesting that they were likely used in signaling. They probably had more limited movement than modern bird tails, and were probably relatively fixed compared to modern bird tails.” Dumbacher compares the tail feathers’ function to that of current birds. “In North America, you might think of the scissor-tailed flycatcher in terms of the way that the feathers were probably for display and to impress the opposite sex. There are also the long-tailed widowbirds from southern Africa, and astrapias from New Guinea. These all have long tails that have little if any function for flight, but are probably more involved in signaling.”

The fossil is the also the first of its kind from outside of China, and as the authors report, due to bone development in the specimen, the bird was likely a juvenile. “They interpret this as being an immature bird, despite the fact that feathers appear to be full grown,” Dumbacher says. “This does complicate the picture a little.” The authors chalk this up to yet another difference between these ancient birds and modern birds.