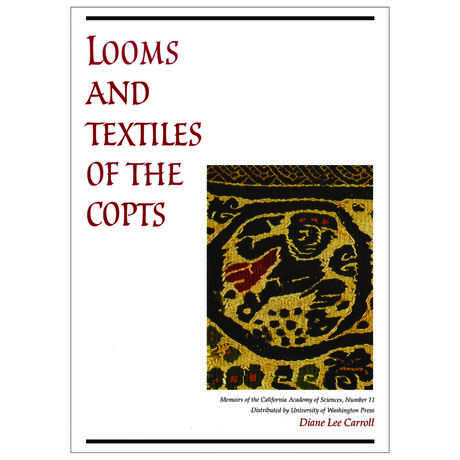 While textiles rarely survive in the archaeological record, the dry desert tombs of Egypt have preserved large numbers from multiple eras. Yet despite a plethora of samples, the Coptic period of Egypt (the first millennium of the Christian era) is often overlooked in favor of the more studied periods of the ancient pharaohs and the Arab conquest.

In the mid-1900s, San Francisco Bay Area industrialist Carl Austin Rietz collected over 75 Coptic textile fragments, a collection which now resides at the California Academy of Sciences. In Looms and Textiles of the Copts, Diane Lee Carroll discusses the history, manufacturing techniques and motifs of Coptic-era textiles, using the Rietz collection as her study group.

The entire collection of Coptic textiles at the California Academy of Sciences is available to view online.

All prices include shipping & handling. Shipping will be by the most economical means. Air or express shipping is available at additional cost. For further information, contact the Department at the address below.

Payment must be received before your order can be processed. Only checks, money orders, and credit cards (Visa, MasterCard, American Express) can be accepted. Payment must be made in U.S. dollars. Make check or money order payable to California Academy of Sciences: Anthropology.

​TO ORDER: Click here to download a printable PDF mail order form. Or have the following information ready, then call 415-379-5383:

Privacy policy: all information received will be used exclusively for the purpose of completing the order and will not be shared with any other individual or organization.

Catalogs of the Academy's Anthropology collection are available to purchase from the Department.

Purchase Looms & Textiles of the Copts

Our permanent research collection consists of more than 16,000 objects, most of which are ethnographic. Current strengths include holdings from the U.S. Southwest and the Pacific Islands, and basketry from California. Our searchable online database features the entire Anthropology collection, including digital images for every piece.