Embark on a journey into the hidden world of coral reefs in this HD film exploring some of our planet’s most biodiverse—and critically threatened—ecosystems.

Duration: 26 minutes
Grade Level: Film appropriate for all ages; content connects to NGSS standards for grades 5 and above

Dive into the heart of the Academy’s iconic Philippine coral reef tank as thousands of tropical fish flutter by. Travel the globe to explore coral reefs teeming with life and learn how scientists are racing to develop sustainable solutions to protect these vitally important ecosystems for the future. Along the way, discover how corals live, breathe, and reproduce, supporting a quarter of all marine life on Earth and providing critical benefits to human communities in our ever-changing world.

Teacher Tip: You can click the Settings cog in the YouTube footer to adjust the Quality to up to 1080HD, and you can also toggle on Full Screen.

In addition to gaining access to stream the entire HD film for your students, educators will be able to browse a selection of science-rich materials designed specifically for classrooms and informal learning environments, including short video clips featuring remarkably realistic visualizations of a living reef and suggestions for activities to accompany the media.

What Animals Live in a Coral Reef? 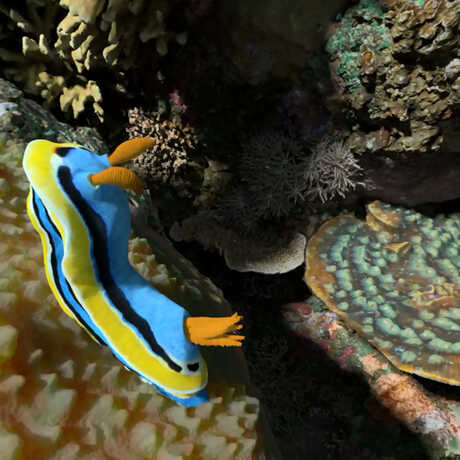 Dive underwater to meet some of the many creatures that inhabit a coral reef. Hidden in nooks and crannies, we find a multitude of organisms, in a complex web of connections.

Why does the moray eel appreciate the cleaner shrimp and the cleaner wrasse? How does the trapezia crab defends its home? What does a nudibranch—a brightly-colored sea slug—eat?

Is a Coral a Predator, a Producer, or Both? 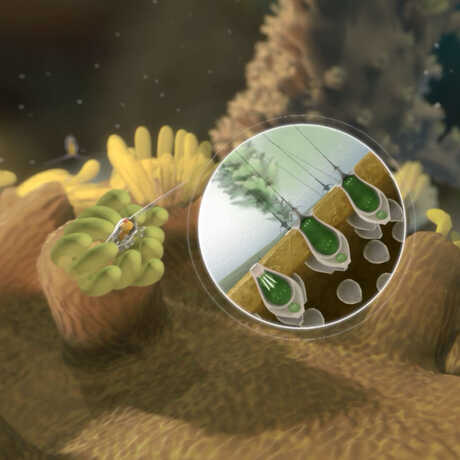 Shrink to the size of a coral polyp to see how corals acquire energy. Like all animals, coral polyps eat. They capture prey using microscopic hooks released from their tentacles. But most of the coral's energy comes from algae known as zooxanthellae which reside in the polyp's tissue, converting sunlight into energy-rich sugars that corals can absorb for fuel.

So would you describe a coral as predator, prey, or both?

How Do Corals Build Reefs? 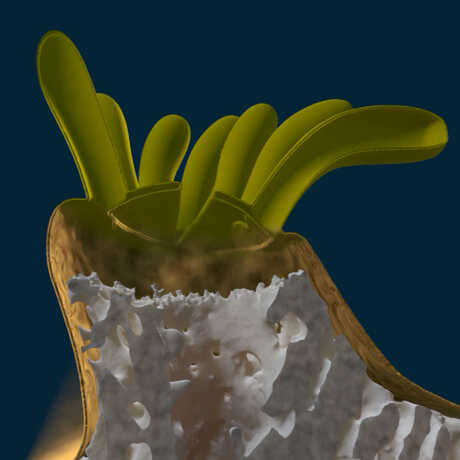 Let's look inside a polyp to see how it helps build a reef. It takes carbon from algae and seawater, turns it into calcium carbonate, and uses this chalky substance to build an internal skeleton.

This visualization showing the interior of the polyp during the skeleton-building process will change your understanding of how hard corals construct entire reefs!

How Do Scientist Divers Explore the Twilight Zone? 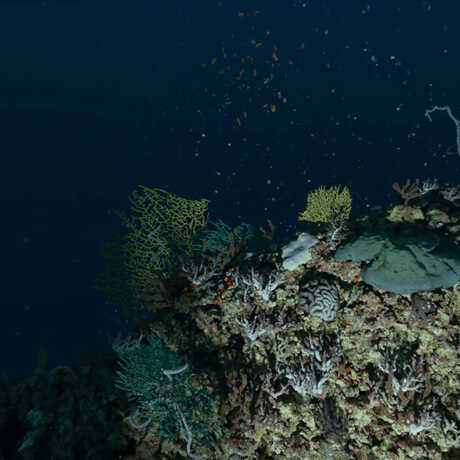 Plunge into the darkness with several scuba divers as they shine a light on sticky jellies, exploring ecosystems that few will ever experience in real life.

How Do Humans Depend on Coral Reefs? 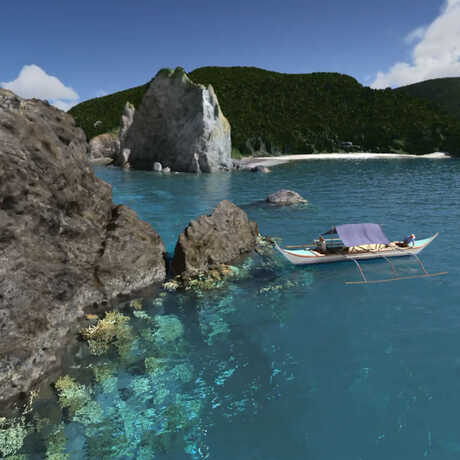 Humanity is connected to our oceans. Half a billion people rely on coral reefs for food and income. But reefs provide more than food. They also provide protection. Healthy reefs protect land from the damaging effects of tropical storms, shielding the shoreline from waves.

Why Do Corals Bleach? 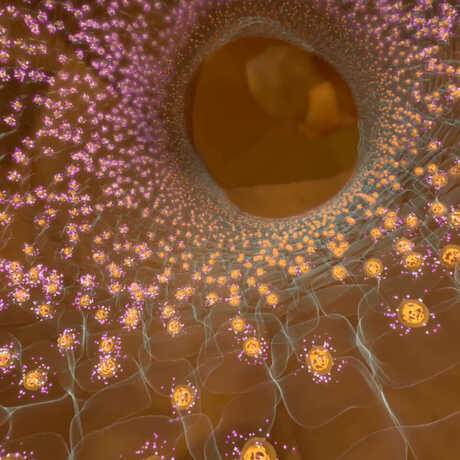 Shallow reefs are particularly sensitive to increasing temperatures. Warming water can cause coral bleaching, when an entire colony of coral polyps loses its color. In this clip, you'll visit the interior of an individual polyp to see how this happens.

Bleached corals are sick, but not dead. Bleached reefs can recover, which is why it's imperative we slow the pace of rising ocean temperatures.

Crosscutting Concepts
Consider using one of the below as a lens through which to explore content featured in the full film. Remember that this will affect the specific learning outcome for your students; don't aim to use all three!

Disciplinary Core Ideas
Depending on your grade level and subject matter, your expected use of the full film will undoubtedly differ from other K-12 teachers. Here we list the scientific ideas that are present in Expedition Reef. Considering focusing on one or more.

Spawning an Intervention
To help corals survive the myriad threats they currently face, an international team of scientists is mastering the art and science of raising coral babies.

An Audacious Plan in the Twilight Zone
A team of deep-reef explorers attempts to surface the unknown biodiversity of Vanuatu’s twilight zone.

A Cure for Coral Reefs
Scientists hope that dosing damaged corals with probiotics could fortify reefs against pollution, disease, and climate change.

Farm to Reef
Cuba’s sustainable farming practices could provide a recipe for restoring struggling coral reefs around the world.

Lens of Time: Growing Against the Odds
As reefs endure another onslaught, scientists are taking a closer look at how corals live and grow—and what may enable some of them to persist in a changing world. 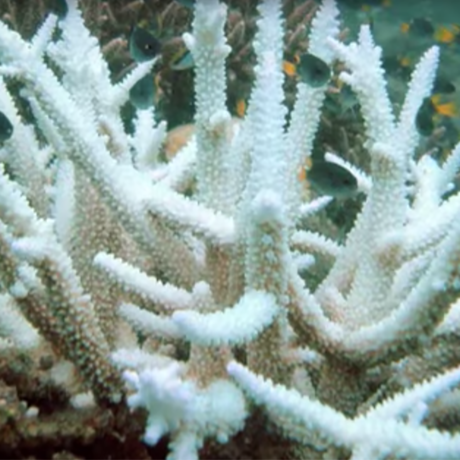 Around the world, many coral reefs are in hot water. How can we preserve these important and diverse ecosystems? 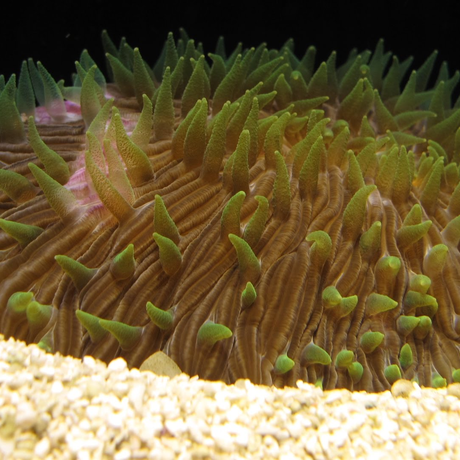 Lens of Time: Corals in Motion

Corals occupy their own time dimension, but if given enough time, they reveal a surprising array of behaviors. 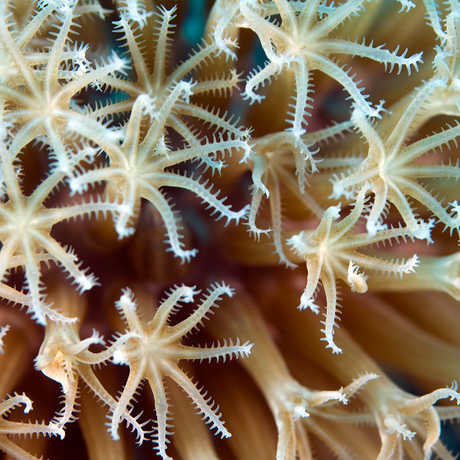 By building an edible polyp, you'll learn about coral anatomy and discover if it's a plant or an animal. 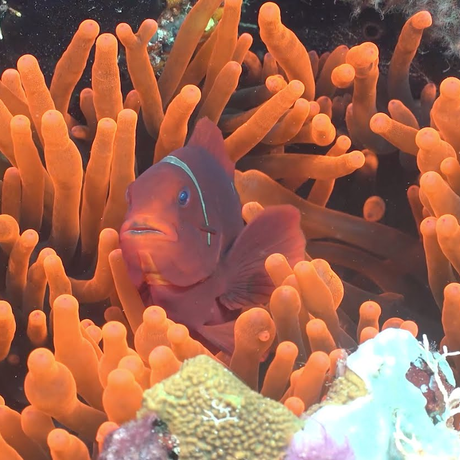 Dive beneath the ocean waves and explore the unique and diverse relationships found on a coral reef. 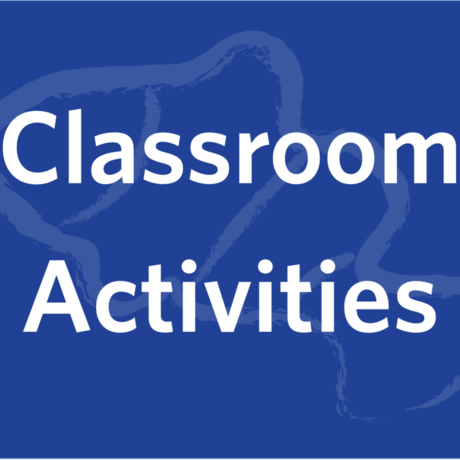 Browse our collection of classroom activity ideas to use with the Healthy Ocean series videos. 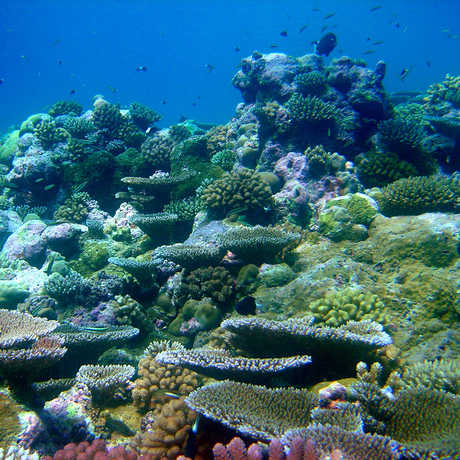 What is ocean acidification, and who is affected by it? Engage your students in a mock conference on the issue.

Preview our films and find information on licensing them for showings in your venue.